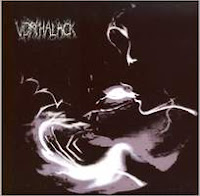 In Memory is a more savage and focused short player than this band's 1993 obscurity Under the Sight of Dragon, but it comes at the cost of some of the crude but distinct riffing found thereupon. Where the band were once kindling a primitive sense for progression, here they've largely adopted the ethos of many European peers, to play as ruthlessly as possible, with straight blasting sequences and vicious vocals. For the vocals, they certainly got it right, because these are appropriately hallowing and harsh, so much that they often smother the less interesting music below with their carnal charisma; but this was still a band seeking to carve out an identity of its own, not quite arriving at the finish line, even though half a decade and numerous interim demos had passed.

In Memory is more substantial than that last EP, and while the band doesn't prove to be such a repugnant curiosity, they certainly offer up some variation. The first two tracks, "Angel of Light" and "Four Fiery Crowns" are performed with the raw force I noted above, drums programmed to blast incessantly while the churning vortex of guitars evoke the barbarity of Mayhem and other Scandinavian evil-smiths. The climax of "Angel of Light" comes with a cheesy female Satanic chant that reminds me of the Wampyrinacht EP (which I believe one of thee guys was involved in); and both of these tunes use keyboard strikes to enhance their sense of full moon madness, ultimately manifesting in some half-decent, if forgettable camp that is at least fun in the actual listening.

After this, though, the contents of the EP shift direction, with the keyboard ambient piece "Hymn to Satan" and further ritual incantation, and then the generally slower "Morbid Rites", which features more use of melody along its black/doom gait. "The Meeting" falls somewhere in between that track and the initial pair of compositions (which were also released as a promo the same year, independently of the rest), a good and sleazy organ deep in the bridge that pairs up with the ghastly snarls. As one might expect, the lyrics here are all pure occult in the vein of Mercyful Fate, Venom, Morbid Angel, and so forth, and the production is amply raw, but not so much that the instruments lose any clarity. Ultimately, In Memory is a more potent effort than Under the Sight of Dragon, as it seems the band's intentions are more sinister and serious, but aside from its passable writing and the 'creep factor' of its vocal carnage and haunted house atmosphere, there is not much to distinguish it from hundreds of other, similar recordings.