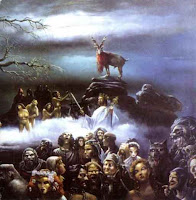 Largely content with the style they achieved on their debut His Majesty at the Swamp, Varathron set out for more of the same with the follow-up Walpurgisnacht. Most of the differences here come from the cleaner production. The album sounds nowhere near as dry as its predecessor, and there is a margin more depth to the actual songwriting, with a more varied range and more pronounced atmospheric passages in several of the tracks. That said, though, they still sound quite similar to their countrymen Rotting Christ, and nowhere near as vile or memorable as Necromantia, whose own sophomore album Scarlet Evil Witching Black was perhaps the hottest and most hellish album the Greek scene ever produced.

But Walpurgisnacht has its place, and I found myself content with the dynamics here, from the tranquil Gothic metal inflections of "The Dark Hills" and its whispered prose, to the harrowing thunder of "Birthrise of the Graven Image" and its incessant charge towards a glory riff in the bridge that wouldn't have been out of place on Non Serviam or Thy Mighty Contract. Where the band goes all out atmosphere, like the majority of "Mestigoth"'s militant bombast or the elegant, soothing seductions of "Somewhere Beyond Seas", or the piano ("Redeunt Saturnia Regina") or acoustic ("Sic Transit Gloria Mundi") interludes, they show a seasoned depth that many bands in the black metal genre of the early to mid 90s would have been afraid to explore, transcending well beyond the boundaries of the medium. But the balance is best channeled into "Under the Sight of Horus", a tune which ranges from lush vistas of forsaken paradise (synths and clean guitars) to thunder and momentum.

There are a few guest solos here from Sotiris of the equally atmospheric Septic Flesh, a trait that further cements the unity these core Greek bands held with one another. I also really enjoy the freakish cover art: biblical, bestial, symbolic and mysterious all at once. From a production perspective, it sounds better than anything else the album ever released until Stygian Forces of Scorn, many years later. Fans of Rotting Christ up to and including Triarchy of the Lost Lovers would do well to check it out, and even through Walpurgisnacht is hardly Greek royalty, its a potent enough successor to one of the scene's cult favorites.