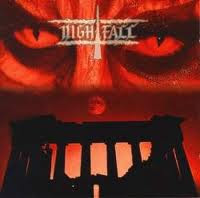 Nightfall pulled out all the stops for their third full-length effort in 1995, Athenian Echoes, discovering the precise median between the black, death, Gothic and doom genres in which they had dabbled for the years prior. This exhibits more range than perhaps any other album in their career, and what's better: the band had actually gotten a great production this time, effortlessly trumping Macabre Sunsets. Though it's not the easiest to categorize, this is perhaps my favorite Nightfall, with a number of strong tracks near the middle of the playlist that stand as practiced monuments to that formative fusion of genres that was evident in the mid 90s, when bands were experimenting with clashes of character, keyboards, multiple vocals and so forth.

First, the lead sequences on the album are breathtaking, majestic and exciting, especially in the tunes "Armada" or "Iris (And the Burning Aureole"). The lyrics have a decidely Gothic bent to their evoked imagery, but they're well written and celebrate the band's Greek heritage with laments to mythological characters. Most importantly, though, is the level of variation being put into each tune. Even the rather straightforward, melodic black charger "Aye Azure" molds itself into some pomp and circumstance with the orchestral synth strikes and serpentine dynamics of the guitar notation. But more interesting are "Ishtar (Celebrate Your Beauty)", with its epic, soaring riffs and sparser tribal bridge, or the extensive, Gothic elegy "Monuments of its Own Magnificence", which uses a cleaner but tormented doom vocal somewhere between Nick Holmes of Paradise Lost and Tom G. Warrior of Celtic Frost. The band even throw in some electronic tinges in "My Red, Red Moon (Emma O)", a foreshadowing of several later albums, and if you're looking for that fashionable 'Greek' spin, you get your sampled flute interludes and so forth, as in the intro to "The Vineyard".

There are a few moments among the 48+ which showcase a less interesting, predictable side to writing, in particular the guitars. But this is not news: both Parade Into Centuries and Macabre Sunsets also suffered from some filler, some need for further gestation. That said, though, the refinements are undeniable here, and its the last album of the band's initial creative cycle, before plunging off the deep end in a crass attempt to mold themselves into the European Gothic metal mainstream via Lesbian Show, Diva Futura, and so forth. If you're looking for a place to start exploring these 20 year addicts, Athenian Echoes is that place, whether you're coming from the angle of atmospheric death metal ala Septic Flesh or you're interested in Gothic/doom hybrids as wide as Paradise Lost and early Theater of Tragedy.