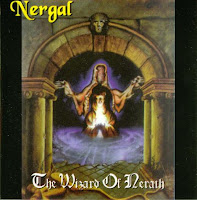 The Wizard of Nerath represents a huge departure from the 'poor man's Necromantia' sound of Nergal's De Mysteris Vermiis EP two years prior. No longer is the distorted bass the central focus, but guitars have been added for a more conventional approach to the genre. There are also some Burzum-like, tortured screams here, especially in the opening track "Timeless Father", which I was not expecting. But otherwise, this is a much closer approximation of the Greek tradition that we know from bands like Varathron and Rotting Christ, with only subtle differentials that stand it on its two feet among the rest of the hopefuls. And despite a few minimal flaws, like the lack of strong guitar riffs throughout, The Wizard of Nerath stands as the band's crowning career achievement, even if that headpiece is not hardly glittering with jewels...

My favorite component of the album is likely the synthesizer work, which truly reflects that mix of martial and ritual novelty that could only come out of the 90s. "Ljus morker" is perhaps the strongest piece on the album, a pompous march purely of keyboards and harsh, shouted vocals that proves their most unnerving composition to its day. Then there's the finale "Sparagmos", a seven minute swell of epic ambient that hearkens to days of the ancients, of barbarism, and of ominous portents. Elsewhere, the synths are simply adhered to provide a glorious circus amidst the driving, heavily fuzzed out guitar tone, like the horn-ish strikes in "My Soul, Blood, Will Be Dripping" or "The Dream of the Dragon", which plays out a lot like what Sweden's Therion were crafting at the time on their masterpiece Lepaca Kliffoth. The vocals are suitably harsh throughout the album, and I actually love the guitar tone, but I found that most of the riffs were individually not that impressive, so they serve only as a fragment of the atmosphere and not a dominating force.

The actual construction of the guitars creates a stopgap between the legendary Celtic Frost and fellow Greeks Rotting Christ, for Nergal writes a lot of fell majesty and thundering epic aesthetics that dwell in both the fantastic and mythological. The Wizard of Nerath often feels like a bastard child of To Mega Therion and Thy Mighty Contract, though the songs are neither as distinct or memorable as what you'd hear on those classics. Still, like Thou Art Lord's Eosforos or Medieval Demon's Demonolatria, there is a particular charm at play that manages to lend the material a cult efficiency. This is not the first album I'd reach for when seeking a traditional Greek black fix, but if you're into most of the other bands I've named here, then it's possible you would derive some satisfaction from this. The bolstered level of variation and the fuzzy weight of the riffing exceeds the 1993 EP in quality, but only mildly. Alas, the band would simply not take off with this, and it would be the last they were heard of for over a decade...