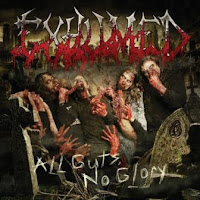 Californian cannibals Exhumed have spent the latter half of the past decade sequestering themselves into their other projects, getting in touch with their feelings, touching and maiming themselves, or whatever other activities occupy the deathgrinder's downtime. Only a handful of split appearances have arrived in the meantime, but at last they've returned to Relapse and the aural slaughterhouse that transformed them into a nation spanning, touring troupe of psychos. Yes, All Guts, No Glory returns more to the hybrid of death, grind and thrash that characterized their rise to prominence in the late 90s: born more of Slaughtercult than Anatomy is Destiny, but instantly familiar to anyone seeking a pre-Swansong Carcass clone who do an admittedly knockout job within the medium.

The trademarks remain: a focus on catchy and intense riffing with a subtext of barbaric thrash interspersed with clinical, creepy melodies, and the mix of snarled and guttural vocals that catapulted Symphonies of Sickness and Necroticism into the vegan trauma ward. Exhumed do not spend all their time aping the British pioneers, of course, and they pull in several influences to once again deliver the goods. This is the first album of originals featuring the two newer members (drummer Danny Walker and guitarist Wes Caley), but they're integration into this grisly autopsy is seamless, and you'll hardly notice a difference between this and Gore Metal save for the slight emphasis on thrashing elements over grinding foundations. I was actually not so thrilled by the preview track "As Hammer to Anvil", but the rest of the record more than compensates, with standouts like the early-Pestilence meets Necroticism duo of "Through Cadaver Eyes" and "Death Knell", the eerily melodic battering ram of "Dis-assembly Line", or the enthusiastic Carcass chaos of "Necrotized".

Not all that glitters is viscera, and a number of the songs do stagnate thanks to a handful of less inspiring filler riffs (for example, "As Hammer to Anvil" has about one worthwhile guitar line). The leads are in general sweet, though, incorporating a canny throwback to traditional metal or melodic death solos, not unlike their previous album, Anatomy is Destiny. This is ultimately a more propulsive and less pensive entity than that, with a rich and punchy guitar tone that deftly delivers the aggression without overbearing the ear, the surgical melodies cutting across the rhythm section with a practiced savagery. It's neither as freshly gutted nor as good as the band's 2000 summit Slaughtercult, an album I personally venerate as the best Carcass tribute in my collection, but it follows pretty closely in those same bloodied footprints, and a ghastly good time if you're willing to look past several of the more mediocre riffs dispersed among the tracks.