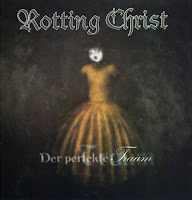 Half a year after Sleep of the Angels was released, Century Media and the band decided to release a fan-oriented EP to capitalize upon the success they were having. Since the band had not previously put out an 'official' live recording, it made sense that any such package should include some material from the tours the band had been enjoying, and why not from their amazing European package alongside Samael and Moonspell in 1996? A time when all three bands were exploding internationally while simultaneously expanding and experimenting with their sounds. A Gothic, atmospheric metal tour de force.

Alas, the five offerings here are all rather cruddy sounding, not so much that you can't make out what the band is doing, or Sakis Tolis' fierce and distinguished rasp, but the melodies seem rather dim in this setting and I have doubts that this was taken from a professional board mix. Sounds more like it could have come out of a hand held recorder. At any rate, despite the underwhelming quality, its enough to tell that the band were quite tight even at this point, a fact I can confirm from numerous sightings of their tours over the years. All of the selections are from Triarchy of the Lost Lovers, which might turn some off that might have preferred the old albums, but this was the album they were touring on, and it makes sense. "Shadows Follow" and "King of a Stellar War" probably sound the best, but "Diastric Alchemy", "The First Field of Battle" and "A Dynasty from the Ice" are all comparable.

Unfortunately, the rest of the EP is a waste, with the band reprinting "Der Perfekte Traum (The Perfect Dream)" and "Moonlight" (bonus track) from Sleep of the Angels. Where this release might have been blown out to include rare demos (there are at least 4 I could think of) or EPs (The Mystical Meeting, Dawn of the Iconoclast and ΑΠΟΚΑΘΗΛΩΣΙΣ would all have been worthy candidates), it just falters. The live recordings are not bold enough to be recommended, and the studio tracks are redundant and useless, so Der Perfekte Traum is weak at best, and not worth your time or money. Check, please.

Posted by autothrall at 7:08 AM