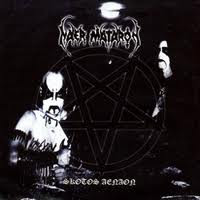 In time, Naer Mataron has gained the reputation as one of the most fierce and ripping black metal artists within the Greek field, but they did not originate as such. Their debut Up from the Ashes was a decent first stab in the genre, but it was more or less derivative of what most of the audience had become acclimated to through the Scandinavian scene. Skotos Aenaon is an improvement as far as its production values, which are bold, brash and hostile, with a killer mix of bleeding guitar lines and Aithir's volatile rasping, but after a strong first couple of tracks, it devolves into a fairly predictable experience unlikely to sway anyone that has already soured on the repetitious riffing currency of barnstormers like Dark Funeral, Enthroned and Marduk.

"...And Bloodshed Must Be Done" is such a strong, sweeping orchestral inauguration that the expectations for the album run immediately high, a martial escalation that leads into the blasting vortex of "Diastric Fields of War", with a potent lead-in riff that will have fans of Emperor, Dark Funeral or Marduk howling exultation. Fast, cold and uncaring, it soon transforms into arching and descending riffs with brief, cleaner vocals strewn about, and a misting of keyboards through the bridge. But as soon as its successor, the rolling, Bathory-like "Iketis", the guitars start to seem incredibly familiar, as if the band simply is incapable of curving off into some unexpected pattern. That's not to say all of them are bad, and certainly "Astro-Thetis-Cosmos" and the wintry and warlike march of "In Honor of the Wolf" manifest enough cruelty to involve the listener, but this is not often through any characteristic of variation, but the strong mix of the album.

When its hellish smoke has cleared, despite its superior depth of sound, I actually liked the song structures marginally less than on the debut, which felt just a glint more original. Skotos Aenaon is not a monotonous album as far as all of its tempos, but quite often the band meanders into what seems like an incessant swath of blasting, and unlike, say, Vobiscum Satanas, which keeps this style entertainingly vicious despite its rather one-track mind. The pentagram cover, the spikes and the corpse, all of this had been done to death by the turn of the century, and sadly Naer Mataron is not offering a compelling enough spin to admonish.

Verdict: Indifference [6.75/10] (and black holes guide me to the Olympian Fathers)