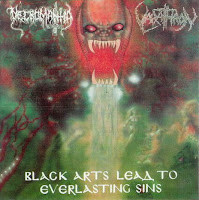 Though the version I'm reviewing here is the 1994 Unisound CD reissue, The Black Arts/The Everlasting Sins was originally an LP release from two years prior. It's also one of the most formative and important releases in all of the Greek pantheon, despite the divided attentions one might suspect from any such pair of artists. In particular, I would have to cite Necromantia's 'side' of the split as the most eerie and accommodating material they've written in their career; Varathron's contribution is worthwhile, and some of their best, but the first half hour of this album is about as good as the black metal scene has ever been from this country, and you should track it down at all costs if you've even the faintest interest in this scene.

The Necromantia songs are culled from their 1992 demo Vampiric Rituals (excepting the tracks "Faceless Gods" and "La Mort"), and its simply astonishing how perfectly crafted and atmospheric the duo can write with simply the drums, bass and Daoloth's horrifically realized vocals. "Lord of the Abyss" is this droning, soupy admixture of bass guitar and evil that shrivels the heartstrings of morality as it steers towards a hellish apex deep in the bridge with spooky piano strikes and the contribution of a guitar lead. "The Feast of Ghouls" begins with a moody organ and then erupts into a faster, blacker pace with more vomited, incredulous vocals; while "Evil Prayers" is a sparser, tribal chanting with synthesizers and whispers, and "Lycanthropia" is under two minutes of arching, nightmare growls adjoined to winding guitars (rare for their music) over a steady bass-line. "De Magia Veterum" is the one Necromantia track not on the original LP version of the split, a 10 minute sprawl of loosely organized energy, maniacal laughter and hideous unrest: as if the band laced a hookah with arsenic and angel dust, took a few hits, and danced about their studio in a dark, Dionysian revelry...with the record button on.

As for Varathron, their work here too is drawn from a demo, Genesis of Apocryphal Desire (1991) which is coincidentally the title of one of their best songs. The version of that actual song and its neighbor "Descent of a Prophetic Vision" are repressed on the CD version from the One Step Beyond Dreams EP (also 1991), so if you've had a hard time tracking that down, this is a better place to own it, collected within such a company of greatness. I've already reviewed that in the EP form, so the draw here would be the powerful synthesizer intro "The Cult of the Dragon", the slowly accelerating black/thrash piece "The Tressrissing of Nyarlathotep", and the gloomy "La Reine Noir" with its Slayer-like ("South of Heaven") melodic spikes. This material is manifest at a natural bridge between their thrashing, nasty roots and the slower, atmospheric direction they'd use for His Majesty at the Swamp, clearly in the vein of friends Rotting Christ, so those who regretted the decision to move away from the thrashing holistic madness of "Genesis..." will be thrilled to be met half way.

Obviously, I do like the Necromantia half of the split far more than the other, so that drags its value down mildly away from perfection, but kudos to both bands here for assembling demos that just feel so 'right' together. This serves better than almost any other recording in its field as an introduction to what Greek black metal was all about. Perhaps you could purchase this and Thy Mighty Contract and receive a more complete perspective, but it would also stand alone. The crude demo-level production works admirably in both cases, and the compositions reek of refreshing imagination and even a tinge of innovation (not so much in Varathron's case). There's a bit of redundancy, sure, like "Lord of the Abyss" appearing on Crossing the Fiery Path, but most in the audience won't have easy access to the demo recordings that comprise most of its play length. As it contains more content, and great content, the CD is preferred to a rip of the original LP. At any rate, this is certainly one of the best 'split' releases that I've been privileged to possess in all of metal music, and there's no reason to avoid its dim and diabolic whims unless you're a fucking poseur and a half, or naturally...deaf.