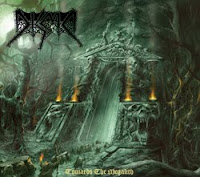 Disma's 2009 demo The Vault of Membros stirred a fair amount of hype for the New Jersey outfit, especially among adulators of this whole new wave of morbid, cavernous old school death metal that reared up in the past 3-5 years. So it's not a surprise that their debut full-length Towards the Megalith would breed such anticipation, and thankfully, the album delivers on at least some of that promise. From the vile majesty of its 'inviting', sepulchral cover artwork, to the copious and crushing guitar tone, and the unmistakable vocal presence of the legendary Craig Pillard (who you might remember from the classic Incantation records Onward to Golgotha and Mortal Throne of Nazarene), this is one tormented trip into the tombs of archaic 90s death metal that devotees are unlikely to find disappointing.

There are members of Funebrarum in the fold, so naturally that death/doom drawl is inherent in the writing, and the Incantation parallels are inevitable. However, I also heard a lot of old Autopsy (Several Survival, Mental Funeral) in the guitar tone, some Bolt Thrower to the myriad grooves, and the primal miasma of the overall atmosphere conjures up much of the early Finnish scene like Convulse, Depravity or Demilich. Most of the songs are elaborate but simplistic sequences of slowly morphing monstrosity carried by the thickness of the rhythm guitars, the organic and sincere expression of the drumming, and Pillard's throat sounds like the gates of an abandoned graveyard being opened after years, their rusted grates pushing aside the gathered soil and leaves of time, and the wind of necrosis rushing out from the dead residents to the unwary caretaker. Tracks like "Lost in the Burial Fog" and "Vault of Membros" itself pride themselves on pummeling sloth, while others like "Chasm of Oceanus", "Of a Past Forlorn" and "Spectral Domination" invest the requisite old school speed and grime.

The only real issue I take with Towards the Megalith, and it's not a small one, is that it suffers from the same setback as so many other albums in this grim, atmospheric death explosion: the riffing itself is simply not that creative. The songwriting is almost uniformly immediate, with no subtleties in among the sludge and slam-hammers. The guitars don't take any unexpected turns or thrills, and thus it always begets the impression of just doing a decent job with what has come before. Sure, the vapid grooving creates a primal and prodigious window into the medium's history, but just think what these same ominous, overbearing vocals and guitar tones would do with a more evocative sense of notation...the possibilities are endless! Unfortunately, that is just not to be here, and since five of the eight tracks have already appeared on the band's demo, split record (with Winterwolf), and The Manifestation EP, there's not much new going on (unless you are just getting into the band).

That gripe aside, Towards the Megalith is still a good listen with an appropriate, darker than pitch production, and should not let down fans of the members' alma maters (especially Onward to Golgotha or The Sleep of Morbid Dreams). Anyone feasting on the dour, old school obesity of evil circa Slugathor, Vasaeleth, Swallowed, Sonne Adam, Decrepitaph, Father Befouled, or the like would also do well to track this down.