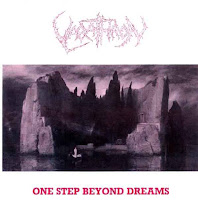 Varathron was another of the formative Greek black metal acts, with a cycle of development which paralleled Rotting Christ. It's not all that much of a surprise, seeing that two of the members of that band played on this recording (drummer Themis and bassist Jim Mutilator), and the thrashing death fundamentals from which both bands sprung also play a heavy hand in the composition. However, where Rotting Christ's Passage to Arcturo took a decidedly slower, more atmospheric approach to this newfound territory, the mighty Varathron countered with some faster, vicious, and far more exciting material that was quite frankly exciting.

While it is doubtful that many would be able to get their hands on a copy of the One Step Beyond Dreams EP, limited to about a thousand copies, the material has fortunately been re-released through later collections like the 2004 reissue of Genesis of Apocryphal Desire. So now there is really no excuse not to experience it. The original 7" consists of but two tracks. The slower piece, "Descent of a Prophetic Vision" features some churning Celtic Frost inspiration which later transforms into a bursting bridge of thrash acceleration and a gloomier lead sequence behind which the music sounds similar to something off Passage to Arcturo. But "Genesis of Apocryphal Desire" is the real reason to listen, a hook-laden transgression with an addictive influence from Possessed and Slayer in the central riffs. This is easily one of my favorite Varathron tunes in their entire history.

Themis' drums are ferocious and far exceed the energy on the Rotting Christ EP, while frontman Stefan Necroabyssious coughs out a garbled, violent guttural style with all the grace of a knife bearing serial stalker. The guitars are mixed very much like an underground thrash demo, or Reign in Blood: crisp and clear and evil enought to carry the force of the brutality like a hatchet to the listener's face. "Descent..." is not quite so punishing or memorable, and it doesn't deserve the A-side, but the riffs there are at least pretty tight. Obviously, being so brief (six and a half minutes), the EP doesn't create the same fulfillment as the full-length His Majesty at the Swamp, but was a feral enough introduction to one of the brightest burning fires in all the Greek scene, it served its purpose.