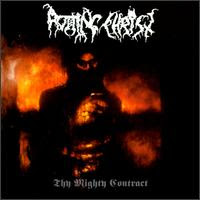 Passage to Arcturo might have briefly wedged open the doors of possibility for the mighty Rotting Christ, but it was Thy Mighty Contract that would kick those doors off their hinges and catapult the band into the collective consciousness of the European metal underground. 'There's metal from Greece now?' Bugger me. For its day, this was one of the best black metal albums released outside of the Scandinavian territories, and yet it was wholly distinct from the forerunners Bathory, Burzum, Darkthrone and so forth. A class of its own, retaining the decidedly thrash and death foundation of the band's roots, but refining those influences in a shadowy concourse of compelling composition that to this day still sounds wonderful.

In fact, this is really where Rotting Christ 'got their sound'. The very first track, "The Sign of Evil Existence", provided the foundation for several of their best albums to come (in particular Triarchy of the Lost Lovers): a glorious and desperate charge through a mid-paced melodic muted sequence over a steady but dry, moderate blast beat. Always a band to experiment with their riffing, there was really no other black metal artist quite like it. Most were falling over themselves to propel their music as quickly as possible, to compete with the extremity of the death metal genre; others were wrought from a rawer, Hellhammer aesthetic. But these Greeks had a peripheral perspective, like what might have happened if Metallica or some other thrash metal band had decided to lean their songwriting into a copious chasm of hellfire and underworld inspiration, bringing the dynamic strength of the parent genre along for the ride.

Though the riffs are far more memorable than Passage to Arcturo, they do manage to retain a loyalty to its atmospheric visage through the incorporation of keyboards and melodic driven lamentations, like "Transform All Suffering Into Plagues" or "Dive the Deepest Abyss". But where it strikes hardest is in its glorious crescendos, like the majestic guitar line crowning "His Sleeping Majesty" or the forward smashing "Exiled Archangel" and "Coronation of the Serpent". Themis (aka Necrosauron) had improved dramatically as a drummer from the EP, and his performance here is more indicative of what he was playing in Varathron; while Sakis Tolis (Necromayhem) has enough character in his harsh vocalization that there is never any sense of the monotony that often haunts the genre. To top it all off, they've even got Magus Wampyr Daoloth of the brilliant Necromantia here on the keys and backing vocals.

There are a few minor caveats here, in particular the rather dry production. It's not as cluttered or annoying as Nightfall's Macabre Sunset, but music this good undoubtedly deserved something better. The tones are simply too far on the thin side. This is also one of the cases where the re-issue actually trumps the original: the 1997 Century Media version includes the two tracks from the Apokatheolis single (1993), and both the lurching, doomy "Mystical Meeting" and familiar momentum of "Visions of the Dead Lover" fit flush with the newer crop of tunes. Also, I'd be remiss to not mention just how much better the newer cover art was than the original...fuck, the face of Thy Mighty Contract's reissue is one of my favorites in the entire genre! Moody, dire, and important, with searing agonies beneath its surface and popping guitar melodies that stick most of its tracks to the listener's memory, this is perhaps the finest Greek black metal debut of them all, and while its not exactly their peak of creation (I marginally favor the 1996-7 material, which refines the ideas laid out here), its nonetheless an essential.