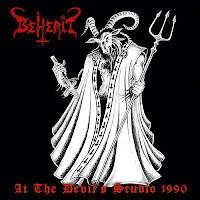 Part of the joy of being a cult metal act (or really, in any field) is that fans and labels will clamor over even the most trivial minutia in your history, and that is how something like At the Devil's Studio 1990 comes to manifest. In the defense of Finland's longstanding gods of grime, minimalism and experimentation, though, the material found here might be more 'key' than the typical slew of rehearsals, demos and bootlegs foisted upon the black metal underground. You see, technically this was supposed to serve as Beherit's debut, but it was shelved due to label troubles, and only recently resurfaced when drummer Sodomatic Slaughter realized he had the master in his possession. So, while many might consider the compilation The Oath of Black Blood as the band's full-length debut, this is in fact the 'proper' work that should fall in its place.

Now, this is not only Beherit we're discussing, but the Beherit of their formative years, so one should expect nothing here but the most volatile, crude and disgusting black metal possible, with a twist of primordial death in several of the tracks ("Grave Desecration Vengeance", etc), and a straight line to the thick and despicable influence of Switzerland's Hellhammer. To call the guitar tone here overbearing would be an understatement, because it pretty much plays center in the more or less rehearsal mix, leaving the drums to hang at the edge of perception and the vocals to blather on in only the most preshistoric approximation of a human being. Once in a while some frightening, noisy lead will spin through, rarely memorable, so At the Devil's Studio 1990 is more or less something that only the most masochistic punishment gluttons are going to really devote themselves towards. I can pick up on the insidious appeal, but in the end I feel quite similar about this that I did to The Oath of Black Blood: part of me revels in its rebellious, raw grasp, and the other part wants to hurl it at the nearest concrete surface.

Ultimately, the value is going to depend on just how much of a cult erection you are sporting for this band or classic, no frills European black in general. A few of the tracks ("The Oath of Black Blood", "Witchcraft", and "Demonomancy") also appear on the original compilation, so there is some redundancy, and I certainly couldn't decide if I enjoyed one version more than the other. Both are ghastly, amateur and irritating (i.e. working as intended). But much of the rest of the album is either exclusive to this once lost recording or perhaps partially rehashed from other material. If you're loyalty to Beherit is consummate, then perhaps the vinyl (or CD) would be worth a grab. They're not exactly brilliant composers, but then, that's never been their selling point, at least not for their older material. Personally, I'm more excited by what the band might shit forth after their 2009 studio recording Engram than I am for repeatedly re-listening to this, but its not bad for an 'historic occasion', at least to those who care.