Kraken Duumvirate - The Astroglyphs of the Ritual of Deluge EP (2011) 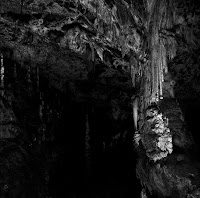 It doesn't require rocket science to figure what Finland's reclusive Kraken Duumvirate are on about. Just a glance at the cavernous fixtures of the Astroglyphs of the Ritual Deluge cover promises an abyss of isolation and darkness to consume the listener, and the dank and swelling sounds are pretty much spot on for that mentality. What is striking is that the duo has released what is essentially the same short-form format as they did with their From the Dying Soil to the Eternal Sea EP in 2008: one extensive, central track prefaced by a prefaced by a brief instrumental opener (last time "I Descend", this time "I Channel"), and followed by a track of moderate length with the titular "_ _ _ _ Me" imperative (last time "Devour Me", now "Sacrifice Me"). Cryptic, indeed, but also consistent.

As for the music, it's ominous and atmsopheric black metal which gives the listener the constant feeling of being slowly drowned into a whirlwind of black ichor. The title track itself is over 18 minutes long, inaugurated by cavernous tones, feint subterranean drips and a haunting narrative of whispers that feels as if some ritual to an Earth deity is about to commence. Gradually the molasses-born dissonance of the guitar arrives to saturate the ear in despair, while a calm and nigh on oldschool drum sequence measures off in the background. Much of the variation that occurs within its depths is brought on by the mixture of dreary spoken and snarled vocals, but I'd be a liar if I said I wasn't engrossed for the full track length. "I Channel" is of course much briefer, a spooky but strangely warm guitar fixated against synthesized woodwinds, while the closer "Sacrifice Me" has the best guitar hook on the EP, again adorned in the cautious step of the programmed drumming.

The downside here is obviously the overall brevity and the contrast of the tracks. Why not just a single, 24 minute length piece? Why such unbalanced divisions? Also, while the composition of "The Astroglyphs of the Ritual Deluge" is droning and admittedly hypnotic, it would certainly not hurt to incorporate some further elements of variation in instrumentation and note selection. I'd actually like to hear how these guys would work in a format of, say, 5-10 minute songs on a full length album. They definitely have that elusive, underworld appeal, that leeching sensation of descent, but it might behoof them to work in a broader scope or a new strategy. Still, if you enjoy voluminous, solemn vortices of misery on the less hectic end of the black metal spectrum, then you could do much worse than Kraken Duumvirate.