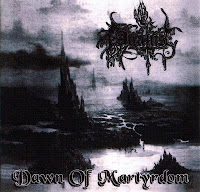 Oddly enough, I know a small number of individuals who prize this debut album, and its successor The Weaving Fates (from 2002) as two of the finest hours in all European black metal. Not only Greece, mind you, but the whole damned continent. While I am inclined to disagree with any such notion, I just find the sentiment striking: surely everything the band performs on Dawn of Martyrdom is pretty much par for the course from this genre in the mid-90s, with riffing streams that rarely evoke surprise, strong but standard drum work, the typical Greek flare for dramatic but uninspiring keyboard presentations and a powerful but ultimately futile frontman.

Now, Agatus might sound better put together, at least for its time, than the other bands the members were involved with (primarily Zemial), but this is about the best thing I can say for them. Okay, maybe not: it's gotta be the outrageous tags the members used, like Eskarth the Dark One, Archon Vorskaath, and Prince Korthnage. All far more involved and barbaric than the usual handles being adopted by their northern kin. Dawn of Martyrdom is pretty much the definition of 'stock black metal', with not a single riff in about 51 minutes that goes anywhere you wouldn't expect it to. Think of the band as a merger of the core principles in the Greek scene (slower, glorious movements and melodies, plenty of synthesizer, and simple leads) and the Viking-like grandeur of bands like post-'88 Bathory, Enslaved and Immortal, and you've got a pretty clear picture of what they were attempting to accomplish.

There are plenty of rigorous, stomping open chord sequences as in "Force of Desecration" that scrawl at a mid pace, and then faster, more driving segments in "Emerge...Through My Diabolic Possession" or "Demons of the Great Kingdom", not to mention the clean guitar, ambient segues like "When the Macabre Dance Begins"; so Agatus is nothing if not mildly diverse in approach, and that trait lends itself well to the overall solidarity of the debut. The vocals are cast in the standard, malicious mold reminiscent of Quorthon (circa Blood Fire Death), but they never take the album to quite the next level. I'd credit Dawn of Martyrdom for having what must have been among the best production in Greece at the time, and the album trumps its neighbors Thy Mighty Contract, Non Serviam and His Majesty at the Swamp in at least that regard, but the writing in general is bland and forgettable, and nowhere near as 'diabolic' as the band seems to wish an impression upon its audience.

You may not have heard this album a thousand times before 1994, but you've certainly heard it since, and the chronological positioning of the Agatus debut in no way makes it remarkable enough to live up to its hype. Compare the album to In the Nightside Eclipse, Frost, Pure Holocaust or even For All Tid and it comes up short. However, it is hardly torment to listen through, it was massive sounding for the time, and if you are interested in something decidedly Greek with huge hints of the Scandinavian scene involved, it was perhaps the one place you could actually turn to. You'll also want to beware the No Colours 'bootleg'; unfortunately the one I'm reviewing, which has incorrect song titles even if they were nice enough to tack on the band's 1993 demo. Also, if it ever came down to a choice between both Agatus full-lengths, go with The Weaving Fates: the atmosphere there is somewhat less grandiose, but the writing is better and the guitar tone adds a lot of punch to the melodies.