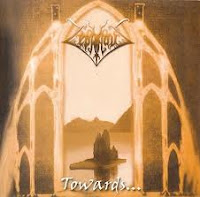 I've encountered numerous curiosities in my examination of the Hellenic underground, but Zephyrous's first and sole full-length album Towards... has got to be the strangest fucking work among them, an album so explicitly un-metal that it makes the band's prior EP sound almost brutal by comparison. Don't be thrown by the logo. The only metallic elements here are a few snarled vocals and a small handful of combustible guitar riffs. The vast majority of what you'll discover here is drum machine fueled new age, pop, dorky proggish rock and some exotic tinges of world music. Normally, I wouldn't even have a problem this, but Towards... feels completely disjointed, scatterbrained and aimed in too many directions at once.

Where the band sticks to their pure Gothic pop fare, like "I.F.O.", they're actually not half bad, and in fact I felt like this tune meshed fairly well with the evasive rasping. But even here, the band segues into this silly synthesized flute sequence that sticks out like a sore thumb as the backdrop to anything but village music for some video game. And these quirks turn up just about everywhere on the album. "Confessions of the Inmost Ruby" breaks out into the middle of an organ solo, and then a funky psychedelic floe. "Shadow Path" is the least 'dark' tune on the entire album, like Pink Floyd done by dweebs on a Casio in the 80s, complete with saxophone solo. "My Cup of Life" is a pompous march with clean, dreary vocals. "Abraxas" attempts to create an ancient Greek mystique with the very New Age vocals, but it's simply too hilarious to take seriously, especially when he begins snarling 'DEATH' in the middle of the verse.

Zephyrous had always been uncanny, mind you, but the polished studio production of this full-length enables the listener to 'best' experience all of their stylistic schizophrenia firsthand, where the roughshod sound of the demo and EP tended to obscure just how off the wall their intentions really were. But try as I'd like to appreciate it, there's just not enough good music here of any style to really dig your nails into. Where bands like Arcturus and Mr. Bungle are keen on overwhelming their audience with brilliant, often hypnotic contrasts, Zephyrous really do just sound like a couple guys fucking around with a keyboard, trying to be as unique as possible. It almost seems as if it was a joke that went too far...but at least a few of the darker, closing tracks like "I.F.O." and "Eleusis Sacraments" are listenable.