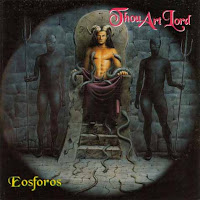 In addition to their collaboration on the Rotting Christ albums Thy Mighty Contract and Non Serviam, Sakis Tolis and Magus Wampyr Daoloth would continue to write for Thou Art Lord, resulting in a number of full-length efforts that evolved stylistically through time. The first of these was Eosforos, an album which capitalized upon their demos with a mystical mesh of black and death aesthetics, ambient experimentation and occult evocation. Using the same lineup as the EP from the year prior, they both expanded and refined their sound to promote stronger riffing and overall songwriting, led by Gothmog's ghastly gutturals and the shining, morbid titillation of synthesizers and Sakis' leads.

To be truthful, this is far closer to Rotting Christ than Daoloth's mainstay Necromantia, but there subtle differences betwixt the two. The vocals are comparable (Sakis even does backups here), but not an exact duplicate, while the riffing is darker and more infused with death metal chugging. However, there are often even more layers of depth and atmosphere drawn upon than on Non Serviam, like the song "Towers of the Autumn Moon" with its creepy yet campy horror synth intro and the driving undercurrents of melody through both the guitar and keyboard; or the crashing percussive chaos of "Through the Eye of the Hierophant". In fact, I'd liken Eosforos to a mixture of Non Serviam and Septic Flesh's amazing full-length debut Mystic Places of Dawn, which was released in the same year. It maintains that same, exotic texture, if cruder and more seductive ("For the Lust of Lilith") and despotic ("The Era of Satan Rising") lyrically.

I must say though that I did not always love the riffing here. A lot of the rhythm guitars, while busy and suitable to their environs, just left me dry, so I was relying on the dry melodies and the keyboards to envelop me. There are exceptions, like the bleeding streams of "Warhammer" or the more directly brutal death metal riffing in "A Call to Chaos (Kaos-Keravnos-Kybernatos"), which was pretty close in style to the first two Deicide records, but on the whole there are just not a lot of patterns here which stood out, so it becomes harder to distinguish them individually over time. I found myself preferring the non-metal passages, but in all its not a bad way to pass 40 minutes of time, even if I wouldn't reach for this over a cult masterwork like Scarlet Evil Witching Black, Thy Mighty Contract or Mystic Places of Dawn. Dark and busy, but the major players here were capable of much more, as they would prove repeatedly.