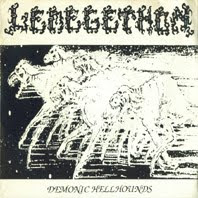 I'm not sure how it could be possible to mess up a recording entitled Demonic Hellhounds, but the tragically obscure (well, not so tragic) Greek outfit Lemegethon has provided some insight. One of the earliest recordings on the Wounded Love imprint, this is a brief EP of three tracks and under 10 minutes that proves a textbook example of how bad vocal choices can utterly destroy a piece of music. Not that the Central Macedonian project had a lot going for it outside of the whispered, laughable lines of dialog that castrate its potential, but the primal black riffing alone is nothing to really scoff at, it simply falls well short of the other acts (of Scandinavian origin) who were making huge strides in such a minimal, vile and despotic space.

Demonic Hellhounds is merely two black metal tracks and an eerie, minute long outro ("Follow Their Traces") which is the one point on the EP in which the whispered vocal don't muck things up. But for "Demonic Hellhounds (Haunters of My Soul...)", you get stripped down, doom drawn riffing and sparse rock percussion splattered with truly cheesy whispering patterns that almost feel like the man responsible (Deifier of Morbidity) is about to choke himself. The guitars never manage to compensate, the riffs are incredibly predictable and though the moody bass lines attempt to create a stark darkness, they too suffer form the vocal molestations. "Murmuring Storms" is a more driving, thoroughly black metal construction, but it seems sloppy, the drums all too tinny and the bassline doing nothing more than copy the directionless riffs. At no point do the guitar parts ever transition into one another with anything hinging on excitement, nor does the viral vocal throat-clearing outbreak in the middle.

Needless to say, the production here isn't helping. The drums and guitars sound almost as if they could be achieved with a random rehearsal recording, and the vocals often feel like they conjured to some other song, rarely congruent with the actual music. Lemegethon had released two demos in the two years prior to this one, which I've never heard, and one might think that they'd serve to sharpen the composer's skills and musical ability, but this is ultimately so amateurish that it lacks even the novel, novice charms that tend to accompany such works. Its a volatile, almost pitiful concoction with nothing more than its own lack of regard for quality vying for it. That might work when there is something redeemable happening in the music, but even there the Hellhounds had fallen off the scent.