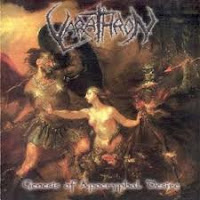 I'm often lauded or loathed for my general hostility towards metal (or really any musical) compilations, but my opinion stands that the best are those used to gather rare or unreleased material for fans that had no real access to it in the past. Varathron's Genesis of Apocryphal Desire is one such exception, a grasp into the band's 1989-1991 era with a few unreleased tracks from the mid-90s tacked on as a bonus. Despite a few redundancies, it stands alongside the band's first two full-lengths His Majesty at the Swamp and Walpurgisnacht as the quintessential trinity of go-to efforts from this overlooked treasure, though I must warn that much of the material contained herein is not necessarily in the same distinctly Greek style as the 90s full-lengths.

Of special importance to me here are the band's demos, Procreation of the Unaltered Evil (1989) and Genesis of Apocryphal Desire (1991), which are included in full and make up for most of the compilation's play length. Procreation... has a darker, death/thrash vibe to it, but supports strong riffing, ghoulish vocals and trippy effects in "Necranastasis", and a more glorious gait in "Dawn of Sordid Decay" that inevitably explodes into the faster black/thrash riffing. I've already made my feelings clear about "Genesis of Apocryphal Desire", an amazing black/thrash tune that appeared on the One Step Beyond Dreams EP, but the same-titled demo also includes a few of the tracks from the Necromantia split ("La Reine Noir", "The Tressrissing of Nyarlathotep"), and a pretty crisp and excellent death bludgeon called "Seven Endless Horizones" which stands as one of my favorites for this particular release.

Beyond these, there are a trio of tracks previously unreleased. "The Great Seal of Graal" is a morbid, swaggering black/doom piece recorded far back in 1989, which is genuinely dark, though I did not enjoy the snappish, under produced drums. "The Mystic Papyrus", from 1993, has a style to it redolent of their debut full-length His Majesty at the Swamp. The verse rhythms are not exactly distinct, but I enjoy the melodic canter of the bridge and the ensuing break into double bass driven melodic death muting. "Deep Beneath an Ancient Dominion" is the third and best produced of these, not to mention the most recent, from 1995, and has a very similar tone to what you'd hear on Walpurgisnacht, or the Rotting Christ efforts Thy Mighty Contract or Non Serviam. Again, not too memorable, but good enough that it's a boon in conjunction with the remainder of this material.

Admittedly, Genesis of Apocryphal Desire could be somewhat more complete if they had incorporated the rest of their half of the Necromantia split (like "The Cult of the Dragon"), and the A-side of the One Step Beyond Dreams EP, but as it stands its still a good value if you're fond of the band's studio output. The demos show a mildly darker Varathron that might have been, had the band leaned further towards their grisly death/thrash origins, but you can clearly hear the evolutions through the years by comparing this to His Majesty at the Swamp, and that is the best purpose something this can ever serve. Of course, this all hinges on the assumption that most who check this out will not own all of the constituent sources. If so, this is easily ignored.