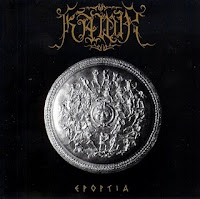 Epoptia is one of those efforts that opens with a roar, but inevitably gradates into a plateau of repetition and familiarity that steers it off course from its initial initiative. This is a far more professional and savage sound than its predecessor To Cavirs, lacking for much of the lethargic idylls and cheesy orchestration and female vocals that made the debut such a paradoxical delight. No, what you're getting here is fairly potent black metal hammering which you would have expected from any number of Scandinavian sources, only wreathed in the Greek mythology that Kawir have always remained true to, while many of their countrymen were off exploring the occult at large, or modernizing their sounds to the Gothic mainstream medium.

"Infinite Chaos" is that inaugural charge mentioned above, a straight blasting black track in the vein of Emperor, Marduk, Immortal and so forth, the spritz of Diavelgenus' vocals creating a more craven venom than the last album. I particularly enjoy the synthesizer strikes during the second riff, but the guitars beneath are rather predictable and lose their luster in short order. "Erebus" begins with a chugging, Greek gait but then accelerates into another programmed blast burst with bland guitars, only the bridge is quite a nice, atmospheric departure. The band uses further astronomical drifts throughout "Cosmic Verve", or the intro to the bloated nine minutes of "Korivantes", but not until "Zeus" (again, nine minutes) do they return to the simmering flutes and passionate glades of their debut. The bonus tracks "Keres" and "Empousa" exhibit a rawer production, hearkening back to their earlier recording, and I found myself rather enjoying their atmosphere, but then, that is not a trait lacking from any of this album.

In the end, it's the guitars that really hinder Epoptia from achieving greater substance. They feel like a mere menagerie of complacency culled from a dozen or so other bands, and they never distinguish themselves through the multiple charging rhythms. The crescendos in attention for this album almost always come in the form of the symphonic visitations, and painfully few individual riffs stand out whatsoever. Certainly Kawir is faster and more punishing than the previous album, and likewise more 'together', but the frivolous sum of its delicious and silly parts of To Cavirs were what warmed me up to it. Epoptia feels more like an assimilation into the broader, international perspective of European black metal, and while it invokes an authentic Greek astrological lyrical focus, looks and sounds good, the songs here are just not as anomalous as elsewhere in their career.