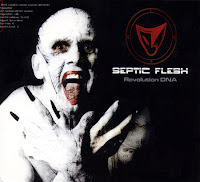 By the close of the 90s, all three of the 'major' Greek metal acts had made large alterations in their chosen sounds. Nightfall had gone from their melancholic Gothic/black roots into a sort of accessible, fetish rock crunch, while Rotting Christ was writing the most arguably mainstream material of their career (though it was still quite good). Septic Flesh, too, would incur a larger transformation than any of their prior full-lengths with Revolution DNA, an effort that drops most of the sultry, stunning Goth/death and doom of previous works in favor of something more tangibly radio oriented, a hybrid of modern melodic death, dark rock and a minor transfusion of electronica. While the earlier albums had their roots firmly in the ancient past, Revolution DNA was the Septic Flesh of the 'future'. Only this future did not look so bright...

Let me be clear, though: this is not a complete 180-degree turnabout from what the band had been exploring with tracks like "The Eldest Cosmonaut" off A Fallen Temple. They've dropped out the female vocals in favor of a wider palette of male shades, about of half of which are the familiar Spiros Antoniou grunts and the other half...well, a blend of mid-ranged cleans and then some more nasally, agitated tones reminiscent of Jonathan Davis of Korn (used in "Science", "Radioactive", and several other tracks). You'll still hear a lot of the band's trumpeting, sailing guitar melodies ("DNA", "Revolution"), and once in awhile the lilting, doom sequences that made efforts like Mystic Places of Dawn and Ophidian Wheel so memorable ("Arctic Circle", "Age of New Messiahs"). Parallels to Paradise Lost exist here, and many of the songs have a similar ethos of potent power chords and melancholic melodies redolent of One Second, or the later (and far better) Symbol of Life.

But then there are the tracks of a more 'experimental' nature, but not really experimental. Gone are the operas of Ophidian Wheel and A Fallen Temple, which had been transplanted to their new side project Chaostar (not to be confused with the song "Chaostar" on this very album). The band flirts with campy electronica and robot voices in "Android", which is about 50% exactly what you might expect with that title, and then 50% atmospheric, open chords with black snarls and repeated lyrical motifs. "Telescope" is like a mix of Pink Floyd and The Kovenant. Rinse and repeat that for "Last Stop to Nowhere", but with more of an industrial undercurrent. Then there is "Dictatorship of the Mediocre", a lamentable groove metal track which is perhaps all too aptly titled, and the worst here or possibly on any Septic Flesh record. Not all of these deviants are necessarily bad songs, mind you, but neither are they sufficiently memorable. I certainly expect Septic Flesh to attempt such mutations, I just expected them to be better than this.

The production is bold, brazen and modern, like many of the other Gothic/metal bastardizations of the times (The Kovenant, Theatre of Tragedy, and so forth), with the melodies perhaps a bit too piercing over the rhythm section. I can't say I enjoy most of the vocals...Spiros sounds fine where he belches out his gutturals, but the cleans don't offer much in their crusade to sound all schizoid and disaffected. Most of all, though, I just found myself clinging to whatever songs were closest to the band's poignant past. I once enjoyed this more than I do today, but there is treacherously little staying power. A few fine moments here, like the opening moment of "Science" or the soaring, resonant bliss of "Little Music Box", sure. But as high strung and 'modern' as the band sounds throughout Revolution DNA, the album seems to have become increasingly less interesting across the years, where something like The Kovenant's Animatronic still sounds quirky and catchy (if incredibly cheesy) to date. Ultimately, this is the worst and the least of Septic Flesh's works, but rest assured that they wouldn't dwell on these shores of possibility for long.

Verdict: Indifference [6.25/10] (a beautiful vase without a flower)