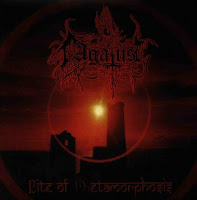 Having been pretty pleased with the full-length Zemial debut For the Glory of UR, despite its often flawed simplicity, I was curious as to what the brothers 'Vorskaath' and 'Eskarth' had in store for the next Agatus release. Not as big a fan of this band as many seem to be, but if there's any reason Rite of Metamorphosis falters, it is not necessarily that the music itself is all that miserable, just that the production is pretty low key and doesn't do it any favors. The duo was still casting their lot in with the Scandinavian, melodic black metal that primarily originated through Sweden, but I felt a few closer tinges of the fellow Greeks, in particular Rotting Christ when the band breaks into a steady gallop.

Just two songs of straight, driving melodic black at around six minutes each, and while neither is all that convincing, I found the titular "Rite of Metamorphosis" to possess the more uplifting, if predictable guitar riffing. The proggy organ that arrives in the bridge is a sweet touch, and the ensuing, mid-paced strut is accessibly epic and swaggering. However, the atmospherics erupting in "Sorcerers Until the End of Time" feel better gestated, with thundering timpani and numbing synthesized violins affixed to the bleeding guitar stream. This is the faster of the two, blasting along vapidly for much of its length, and the riffs have a bit more pep, but it just never attracted my attention until its mid sequence.

As I hinted, the production here is not the forte. Not bad enough that you can't hear everything, but it feels muffled and repressed like a demo somewhere below Agatus. A bit of a letdown, because even if I didn't enjoy Dawn of Martyrdom, at least that sounded good. With stronger guitar tones and better depth, these same two songs would be far more effective, but most of the peaks and valleys here are rendered into the same, rusted landscape of indifference. The vocals for this band have never impressed me, but they're especially bland here, and perhaps the most strident contributor to the EP's overall mediocrity. All of this would be improved for the band's full-length followup The Weaving Fates (five years later), but Rites of Metamorphosis fails to distinguish itself against hundreds of other European black metal releases through the 90s, and even if it has some curious touches during the bridges, this style was far better off in the hands of bands like Sacramentum, Lord Belial or Dissection.