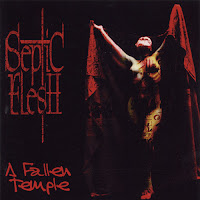 A Fallen Temple might not be the prize steed in the capacious stable of Septic Flesh, but it's nevertheless a fine followup to Ophidian Wheel, and maintained the band's quest for intellectual and musical refinement. Somber, eloquent eulogies clothed in the dim haze of brutality. Gothic genetics bound to a sinking hull of archaic atrocity. If there's one problem with the album, though, it's that there is a noticeable fragmentation between three substrata. Where Ophidian Wheel balanced itself between powerful, melodic death/doom pieces and a handful of eerie, operatic vignettes, A Fallen Temple furthers breaks itself into a neoclassical sequence, a handful of exhumations predating Mystic Places of Dawn, and a newer, mildly more trendy facade which runs congruent to the Gothic metal growing popular in Europe during the late 90s.

This last category is most evident through "The New Order - Brotherhood of the Fallen Knights" which is highly redolent of something Sweden's Therion would have written around the same time: catchy but simple, chugging guitar lines and overpowering, epic melodies laced with a mix of gruff and clean vocals. The strong gutturals are still present, and there's still a stark sense of 'heaviness' about it, but the male cleans are not really a strong point. "The Eldest Cosmonaut" was chosen as the lead-in single here, given its own video and EP release, and it makes a lot of sense, as the creepy, ghostlike impressions of female vocalist Natalie Rassoulis and the haunted gleam of the pianos and ascending, lilted guitar lines are quite distinct. Still, I got the feel that the male cleans were once again lackluster, not really standing out above the guitars, while Natalie seems to stand out too far, an issue I had with several of the tracks on Ophidian Wheel. Still, for these few faults, the songs are memorable enough, and joined with the similar, soaring "Marble Smiling Face" they hint at the band's plausible potential within a more mainstream market.

Then there are the "Underworld" segments, which are begun here and unfortunately finished on The Eldest Cosmonaut EP. A mistake, really, as I'd prefer to have them all gathered in the same place, even if that would have stretched the total album to about 70 minutes (it's about 55). "Act I" is a jarring, schizoid sequence that feels like what might occur if Diamanda Galas were to track a Castlevania sequel...and the madhouse male vocals and female screaming build towards an appreciable asylum with a reek of primeval theater about its gates. "End of the Circle - Act II" is more potent and swelling musically, with its rousing and hammering orchestration that reminds me of Les Miserables, ambitious to say the least from Christos Antoniou and his gangly band of ghouls. Both of these acts are entertaining in their own right, but extensive enough a deviation that they feel rather 'outside' the rest of A Fallen Temple. Basically, this was the birth of their side project Chaostar, which strove strictly in these idiosyncratic channels. The "Underworld" sequence (both here and on the EP) were even strung together as a sort of demo.

Then we arrive at that last remainder of the album, the re-recordings of classic Septic Flesh material from the wonderful Temple of the Lost Race EP (1991). They don't sound a hell of a lot different, nor are they far better produced, but the band have shifted about a few of the synth tones, made the leads more bluesy ("Setting of the Two Suns"), and frankly I like these versions just about as much as the originals. All four of those tracks are present here, with one of them being renamed from "Another Reality" to "The Crypt", tuned differently and in my opinion more ominous and memorable than its original incarnation. It's sad to think that this is actually the best segment of A Fallen Temple, and you've guessed by now that the title is in tribute to that formative work, but the value is naturally diminished if you've somehow already got the EP. At least the re-recordings are somewhat better 'fleshed out'.

Lastly, the Greeks have provided a more clashing version of "The Eldest Cosmonaut" closing out the album, a "Dark Version", with the female vocals abrasive to the point of being ungodly annoying, but that really doesn't deserve mention here as it is the one entirely unnecessary and shitty misstep of note. The vocal mix throughout the sum of the album is far from praiseworthy, but here it escalated into a crass annulment of my attention span. Otherwise, the Flesh have once more brought the goods, with a number of their signature melodies and fathomless dark poems that belong on a highlight reel with the tastier bits of Esoptron and Ophidian Wheel. One does get the impression that the Greeks were searching for some new investment of their time, which would in fact manifest in TWO investments (Chaostar and the far more trendy melodic death inherent in Revolution DNA), but there's enough of that rich, pungent death/doom soil here to live up to the titular imagery.