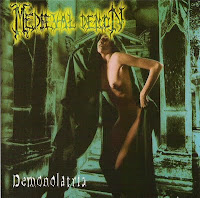 Medieval Demon were one of the lesser known acts to arrive on the now-defunct Greek imprint Unisound, and they differ from their countrymen in that they reflected more of a cheesy northern Europe blend of black and Gothic metal. Whereas bands like Varathron and Rotting Christ were (for the most part) extracting the legacies of the ancients in their lyrics, these guys were just happy with chicks chained up in haunted castles, succubus summonings and other churlish and entertaining occult perversions. And you know what? There's absolutely nothing wrong with that whatsoever. Musically, they had a style not unlike Emperor, Mayhem or early Ancient, only ravished with much more Gothic elegance via organs, violins and campy but endearing orchestral segues.

They're also a lot cruder when it comes to their riffing and transition ability, so you might think of the album as a poor man's In the Nightside Eclipse with far less poignant lyrics and impact. For example, take a song like "Dark Widow" where it cedes its orchestral overtures to some brutal but primal riffing that barely involves a handful of chords on the guitar. The vocals of 'Crimson Embrace' are full and resonant rasps that carry well over the primitive sequence of chords, and when they transition from one riff to the next you taste an echo of Emperor. In other of the aggression tunes, like the title track or "The Rise of the Moon", they invoke more of a straight ripping sensation circa Bathory or Mayhem. Often, the guitar lines are forgettable despite their ability to conjure up nostalgia for that period, but then you'll have a tune like "No Flesh Shall Be Sharp" which simply rocks your socks (and pentagram) off.

The drums are often sloppy feeling, but this is not so much the fault of the actual musician rather than the band's inability to smoothly course from one riff into the next. One area where the band never fails, however, is the orchestral/ambient pieces like the sweeping "Queen of Sorrow", eloquence given blasphemous musical flesh through simple but lush string synthesis and violin breaks; the eerie "Loudness in the Dark"; or the pompous, almost Wagnerian romp "Warrior's Anthem", or the extensive finale "Melancholy". In another life, Medieval Demon's 'Moonstruck' might have taken it upon himself to score all manner of films and games, because he was the Greek black metal of Castlevania and it helps heave this fanged beast well over the precipice of mediocrity. Werewolves, vampires, moonlight, phantoms and seduction: these are the tropes evoked through the substantial 53 minutes of this entity's sole full-length studio foray, and if you've a natural fetish or inclination for such drivel then there's no reason not to have fun with it.