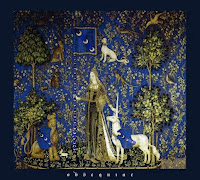 Obsequiae is essentially a reconvening of the Minnesota project Autumnal Winds, who produced a stream of demos in the last decade that led to a brief hiatus, Blondel de Nesle's work in the rustic funeral doom act Celestiial just beginning to take off. Those who are expecting a similar drone-based, spacious and grim exercise in stark natural minimalism might be very surprised here, because if anything, Obsequiae is a cogent study in heavily melodic, unending floods of Medieval/folk guitars drifting atop simpler beats and rasped vocals, almost an antithesis of Celestiial, anchored by the rhythmic skill of multi-instrumentalist Neidhart von Reuental (and no, I do not have a clue if these are their real names).

Suspended in the Brume of Eos is a substantial effort, defined through its contrast of lush acoustic segues and driving, fell glories that feel decidedly European in origin. Obviously the nearest parallel one would find would be the pagan/folk metal genre from overseas, but I liken the material most to the track "Moonshield" by In Flames (before they got all metrosexual). An excellent song, and perhaps an unexpected comparison that many would scoff at, but imagine that track's winding and beautiful string melodies being woven throughout 42 minutes of new, original material, wrought between lovely acoustic shorts like "Sidhe", "Wildes Heer", and thundering, desperate romps like "Altars of Moss", "In the White Fields" and the night overwhelming instrumental "Cabin Lights" which had my thoughts reeling towards the past with its crescendos of dual melody. The duo also provides a basis of straight, aggressive black metal as in "Arrows", which is more of a wall of sound chord onslaught, so there is enough variation here that it doesn't feel like the same gilded guitar graces repeated into monotony.

The production is fluent without being excessively polished, and here is where the band's own rustic tendencies shine, for there's this natural backbone. It's very easy to close one's eyes during this offering and conjure up images of knights and ladies fair gallivanting through the woods, often in bliss and harmony, but often with their heels set upon by the jaws of raving wolves. I can't say I was a huge fan of the vocals here, because they're simply all too common contrasted with the more engrossing and eloquent guitar licks, but in tandem the two function as intended. Suspended in the Brume of Eos is easily recommended for fans of the seasonal and rural in their black metal, perhaps a dash of earlier Agalloch (Pale Folklore or The Mantle era), Opeth circa (Morningrise), or Canadians Woods of Ypres (only Obsequiae is far superior to that lot by any conceivable standard). You're not likely to hear much in a similar vein this year, and this full-length should evolve into an album of choice for fall foliage sightings and stirring regrets. Score another sleeper for Bindrune Recordings.