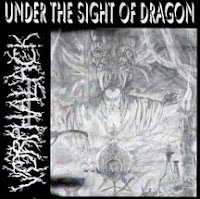 Vorphalack were not quite part of the 'inner circle' of Hellenic black metal acts spawning forth in the 90s, but they did inhabit the same general field of interest as fellow Greeks Rotting Christ, Zemial and Varathron. That is, slower to mid paced black metal reliant on a cruise mode atmosphere more than the blazing speed and arching symphonic overtures of an Emperor, or the stripped and lavish dichotomy of a Burzum. Under the Sight of Dragon is yet another of those 7" releases available through Molon Lave, and in reality its just the vinyl version of their In the Sight of Dragon demo the same year, with just two songs rating in below 10 minutes of content (not unlike Thou Art Lord's EP Diabolou Archaes Legeones).

Since they evolved along a sidereal tract to those central Greek artisans, there are some curious differences to how Vorphalack approached their writing. This is a more 'progressive' form of that slower paced fare, to the point that I heard a splinter of Fates Warning (circa Awaken the Guardian or No Exit) in the guitars of the first track "Hall of Death". The synthesizers used here are also very prog-like, almost too tingling and spacey for the whole pseudo-vampiric, LaVeyan Satanist shtick Vorphalack use in their lyrics and corpse-painted image, and while effective, the gruff guttural vocals (akin to Thou Art Lord) are decidedly monotonous. The other track, "Obsessed", does vary to a degree, with a brazen organ intro, and this is the better of the pair, with slowly churning guitar grooves and a nice if simple lead in the bridge, not to mention the bass in the rather psychedelic closing sequence.

All told, Under the Sight of Dragon is an intriguing alternative to what was happening elsewhere in Athens and the rest of Greece, but you get the feeling the band weren't quite assured of where they wanted to take this, and the final product feels bland and ultimately forgettable. The actual production is lacking and there are no riffs of note featured in either track, only inclement pangs of atmosphere are left to draw in the listener. As a result, they would never flirt with the same success as Rotting Christ, Septic Flesh or other bands from their homeland. This is merely a footnote, though the band would survive on into the 21st century with a number of releases.