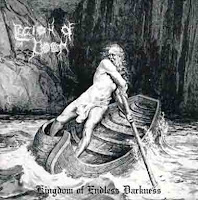 Legion of Doom have an interesting parallel to Rotting Christ in that both bands started their careers within the death/grind mold and then branched out into the black metal genre. However, the end result of this mutual transformation were quite different. Where the latter breathed new life into the style through their glorious, unique writing imbued with the dry thrash tone and melodic climes, Legion of Doom simply hammer the listener with a hypnotic repetition not unlike one might find in the majority of Scandinavian black metal, or perhaps earlier Graveland (though these Greeks are less sloppy). That's not to say that this more predictable approach is worse for wear, because they can write a half-decent riff and slather it in a ghastly architecture and atmosphere with the best of them, but I've certainly felt like nodding off at several points on this album, despite its strengths.

Kingdom of Endless Darkness was their first full-form release, after a handful of splits and demos starting in 1990, and it seems primarily centered around the 16 minute bloat of its title track, "Kingdom of Endless Darkness (ADES)". Pretty ambitious for your debut album, and sad to say that this track becomes too highly repetitious, with only mild variations in the actual riff construction. I'm not opposed to the technique if the core guitar lines are suitably expressive and evocative, but these are not, and it seems to rely too heavily on the grisly vocals, which stretch above it the monotonous mass like a blood lusted raptor wheeling above its prey, the clarion carrion calls drifting some distance on the death stench. Once you get to the shorter tracks like "Hymn to the Fiendish Veleth" or glorious, driving "ARIS...God of Brutal War" (with its potent subtext of distorted bass), the album is far more successful. For 2-5 minutes, these chaps can carry a tune like a battle standard, and such can also be said through "The Black Queen". There is one other, extended tune in "The Desecration", but this is choked with infernal, thriving melodies and variation which rescue it from the same claptrap as "Kingdom...", not to mention its only about half the length.

I do love the production here. Archaic and ghoulish like an unending nightmare, but not without a subtle hint of glory spiked through its warlike carapace. The vocals are superb, the guitars at the right amount of abyssal fuzz, the drums solid and the bass ugly where it needs to be. Of all the 'first wave' Greek black metal acts (let's say from about 1991-1995), Legion of Doom is closest to creating an aural mirror to the tale of Tityos, the giant who was doomed to have its entrails fed on daily by a pair of ravenous vultures, in the hellish prison of Tartarus. Malevolent, assured, and steadier than almost any of their peers, they also presented one of the more spiteful extremes of the genre, lyrics wreathed in hatred for the devout who walked in the light above. Kingdom of Endless Darkness might actually represent the most 'traditional' or approaches to the black metal genre in all of the Hellenic sect, but outside of the far too swollen title track, they make a reasonable and appreciably wretched work of it.