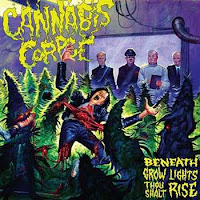 Virginia's Cannabis Corpse have at last outgrown their gimmick, and that's both the strength and tragedy of their third full-length Beneath Grow Lights Thou Shalt Rise. One of the most riff oriented, memorable death metal outings I've heard in recent months, it takes the crisp punch and pungency of its predecessors Blunted at Birth and Tube of the Resinated to new heights of potency, somehow paying tribute to the objects of its lampoon while accelerating into new climes of composition and technical precision. Yes, on the surface this is a parody band more concerned with where their next high is coming from than their position within the death metal spectrum, but they're just so damn good at it that one wonders what might happen if they dropped the dope shtick entirely...

This time out, they lovingly mock the titles of Deicide and Morbid Angel tunes, though the results are mixed. Where "Gateways to Inhalation" and "Blaze of Torment" seem perfectly fit, there are others like "Chapel of Bowls", "Dead By Bong" and "Sworn to the Bag" that seem more semantically desperate. That aside, though, just about every track on the album is a whirlwind of entertaining, dynamic death and thrash metal riffs spilling forth from both the precedent of the band's influences and their own, warped sense of creativity. Songs like "Dead By Bong" and "Where the Kind Lives" are loaded with functional, memorable guitars at a frenzied clip that recall the sound of their primary stylistic mentor Cannibal Corpse without cloning it, while Andy 'Weedgrinder' Horn does his level Corpsegrinder best at creating a punctual, guttural momentum to the proceedings. Several of the later songs, "Gateways to Inhalation" and "Slave to the Chron" are almost worth the price of emission alone!

Flighty, polished and engaging while never once abandoning the concept of sound construction, the almighty riff that so many death metal artists leave by the wayside in their quest to out muscle the competition. Beneath Grow Lights Thou Shalt Rise is a step beyond even Tube of the Resinated, the first hint that they were something more substantial than a vapid, vaporous gag reel. It's internally consistent, replete with fine performances from all the musicians, and so energetic that one never knows whether to bong along peacefully or shatter the damn thing in a fit of moshing anger. And that, my good friends and beloved enemies, brings us to the one sad aspect of this music: Cannabis Corpse is in danger of always being 'just that goofy pot band' rather than the death metal royalty that this album proves they deserve. As we ponder the seriousness of their skills alongside the silliness of their concept, let us try not to forsake the one for the clowning veneer of the other.