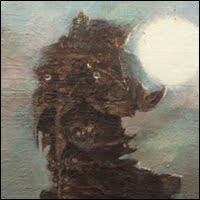 Based on the creepy cover art and the first track, I was expecting something truly strange out of Germany's Ave Maria. Yet the further I was getting into Chapter I, the more conventional the songwriting seemed to grow, to the point that I was reminded of Norse acts like early through mid-90s Mayhem or Darkthrone, with a slightly uncanny edge to it brought on by the quieter segues spread throughout the track list. To be clear, they've got a bit of a rock edge to them that tends to manifest in the grooves and largely mid-paced songs, and they entirely avoid the cliche of incessant and soulless blasting for a more chug based romp festooned by the dissonant, raw riffing so often cultivated through the underground.

"The Trembling Eye" is quite misleading, a brooding piece with melodic, slightly affected guitars wrought in a clean tone over a straight beat, collapsing about halfway into the realm of distortion. The second, "Coitus Behind Mortal Walls" is a bit closer to the majority here, palm muted frills swathed in wavy, wall of sound riffing that adheres well to the ominous, thick rasp of vocalist 'A'. This is actually one of the better tracks, along with the similar "Among Them" and the huge, evil melodies woven through "Impulses from the Sphere of Broken Larynx", but there aren't too many here that fall out of line with the overall punch and dementia being evoked in the lyrics. The band does return to the cleaner guitars with "Tongues", and there are several points on the album where multi-layered, almost inebriated vocals are applied through the verses (as in the bridge of the closer "Meandering Through the Tunnel of Trance") for a bizarre result.

Chapter I sounds good, of course, without any danger of being overtly polished, and the guitars are brought admirably to the fore, while the drums maintain a really good crash to them that feels as if it were ripped straight from the rehearsal room. Though most of the songs move at the same general pace, there is enough variation in the riffing to keep the listener on nervous edge here, but individually they're not all that strong, and frankly I'd love to hear the band go a little further off the hinge, to match the strange imagery of the song titles and lyrics, and the alien appeal of their cover visual. Speaking of the lyrics, they're pretty well conceived here, touching upon the precipice of the Satanic with a psychotic and sexual slant, quite cool to read through as you're experiencing the music, even if the actual vocal patterns are not wholly memorable. On the whole, it's a good debut, but it plays it a little too safe, and I feel that Ave Maria are capable of something far more fucked up if they set their warped minds to it.