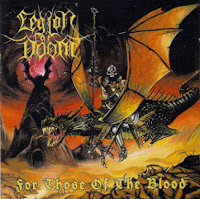 It's rather a surprise that Legion of Doom's sophomore effort was not more highly regarded upon its inception, because its easily one of the better produced black metal records of its day, and takes some marginal strides beyond the debut Kingdom of Endless Darkness in terms of songwriting quality and overall impact. Perhaps it was the fact that people were not yet suckling at the trough for the Greek underground (sadly, they still aren't), or the NSBM connotations the band had developed (though most of their lyrics dabble elsewhere), but For Those of the Blood deserved better than it got. Granted, this is hardly a front runner for cult classic status, and it's not the most innovative nor memorable record in its class, but it's timeless enough that it doesn't sound an inkling less fresh now than then.

You'll note that the synthesized symphonic touches have increased here, not only through the pure organ/ambient segues "Sunrise of the Golden Dawn" and "Το Μυςτικο Του Κοχυλιou" but also incorporated straight into the charging black metal rhythms; especially useful in the grand, desperate opener "Narjniian's Eternal Winter", through which the grinding melodies are granted a Gothic grandeur of anfractuous organ play. Or the bridge of the title track, in which the band's draconian thunder is adjoined by a soaring keyboard clarion. Mostly, I'm reminded of the 1994 epic In the Nightside Eclipse by Emperor, only slightly less complex in execution and decidedly cleaner in production. I never got the same impression of tortured, wintry darkness as there, but Legion of Doom played pretty fast and unrelenting without ignoring the virtues of variation, and I enjoy how some of the blasts drop out, spoken words are introduced over the still-driving chords ("For Those of the Blood"), a prime precursor to hostile escalation.

Still, there are songs in here which do become rather vapid and predictable in riffing patterns ("Ερινυες... Δαιμωνες Φτερωτoi" or the brief "Messenger..."), and even at its heights, the first three tracks, the album is not strictly memorable. There's nothing here necessarily that you hadn't already gotten better from several predecessors out of Scandinavia, and it does ignore the characteristic Greek glories of slower to mid paced material overborne with pagan eccentricities. The lyrical topics here range from mythology to pride to black magick, and they definitely pay homage to their country's great past here, through Daimon's grimy and constipated rasping. To its credit, For Those of the Blood does sound just as polished and potent as it did those many years ago, and for those seeking out the balanced attack inclement in much of the European black underground of the mid-90s, it's worth hearing. Just don't expect to be struck down by a feat of Herculean proportions.