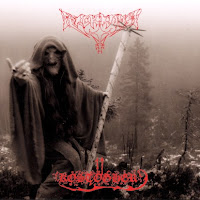 With Kostogher, Shamaatae decided to trade some of the fine tuned production values of his debut Fran Marder to create a primitive, caustic and aggressive atmosphere. The differences between the two albums are more of aesthetics than actual stylistic deviation, with a razor edged sheen to the guitars that hangs just below the constant, thundering double bass work, and vocals that feel more spastic and I daresay 'bratty', even if they use the same level of echo. From what I've read, this album was intentionally under-mixed, but having heard so many poorer sounds coming from the genre, it still remains level with the 90s works of bands like Marduk or Lord Belial.

What I don't actually appreciate so much upon the sophomore are the guitar riffs, which seem admittedly basic and predictable for the day. Fast and versatile enough to endure the rigors of boredom, but almost entirely incapable of hurling a surprise in the listener's direction. Very standard stuff, common to the Scandinavian third wave. There's more of a mournful melodic integration than the debut, especially in tunes like "Oþer Trulhøyghda" where a simple, sad line is cast over the rhythmic subtext, but neither are these moments any more memorable. The most compelling aspect of the album is in the contrast between the straight on raging black metal sequences and then the folksy, ambient departures like the intro, or "Gamall Uvermark"; or the surge of melancholic violin strings in several of the bridges. Overall, though, I think that it is perhaps "Bedrøvelse", the most melodic track on the album, which is the catchiest, though it does suffer from a sore thumb complex against the more meandering, aggressive environs.

Shamaatae's Burzum-like howlings are infused with more guest cleans this time around, as in the opener "Skoghens Minnen Vækks", but once again they don't add much other than the illusion of versatility. The riffs below the mesh are still methodical and bland, and they remain so for nearly the full hour of the record. The duration itself (almost an hour) also serves to work against it. In the end, Kostogher was a marginal letdown after the debut, but it's still a decent effort if you can forgive its lack of much subtlety for savagery. The debut was not only superior due to its Abyss Studio production, but the songs themselves seemed a better measure of the lyrical, Swedish mysticism and meditation that the creator is indulged with. There is just not that much interesting going on here, and the riffing patterns aren't evil or engaging enough on their own to fuel the fires of its velocity alone.