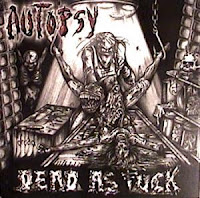 What potential use one gets out of Dead as Fuck will really depend on just how obsessed with California's cavern dwellers one truly is, for its little more than a combination of two previous Autopsy live recordings, one 'official' and the other not. This is the third collection for this particular band through Necroharmonic Productions, and it is 50% a repress of the Tortured Moans of Agony live album (1998), recorded in New Jersey. If you missed the chance to acquire that limited release, the material has been remastered here, and in terms of sound its preferable. I have previously reviewed that record, and found it not much to my liking, so it hardly provides an impetus to rush out and acquire this fan package.

The rest of the content is culled from a bootleg album called Live from the Grave, which was recorded in San Pedro, California in 1991, thus giving the listener a glimpse of a slightly earlier Autopsy (Tortured Moans' performance was '93). The actual sound quality once again leaves something to be desired, with a noisier overall clamor than the Tortured Moans session, which have a coiled if repressed power and punch to them, but the two are comparable enough that listening straight through will not throw anyone off. What's more the bootleg set contains a number of tracks that weren't present for Tortured Moans: "Severed Survival", "Hole in the Head", "Service for a Vacant Foffin", "Enbalmed", and "Robbing the Grave" all turn up here, with a few redundancies ("Fiend for Blood", "Charred Remains", "Torn from the Womb").

Still, I don't really feel like this is a definitive live experience mandatory for the band's fans. One should absolutely select this over Tortured Moans of Agony itself, but otherwise cross your fingers for some live mega-package in the near future (such things usually accompany reunions). Scraps of this material have appeared elsewhere (i.e the Torn from the Grave comp through their main label, Peaceville), but if you seek an hour of straight, uninterrupted primal death from Chris Reifert's cult favorite, it's pretty much going to be this or the Dark Crusade DVD. Dead as Fuck is hardly flattering, but it's genuinely ferocious.