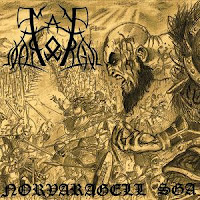 Man Daitõrgul is the black metal vision of a single Spaniard, one Nagh Faëre, who performs all of the instrumentals and vocals on this demo recording. It's rather unique in that the music is written to accompany a fantastical novel by the same creator, who has gone so far as to even create his own language ('Baaldro'), to lend a bit of mythic realism to his compositions, akin to how Tolkien approached his world building. The name of the musical entity is thus read as 'Fortress of the Thousand Towers', and the demo's title, Norvaragell Sgă, translates to 'Hymn to the Northern Warriors'. Much of the lyrical concept is focused on war and glory, as the demo's belligerent cover art (dominated by a figure similar looking to the video game character Kratos) would suggest.

Naturally, I am drawn to such creativity like a moth to a flame. The added step of designing one's own tale, one's own dialect, and setting the events within the music to a landscape of what never was (unless cast in allegory) tends to conjure an immediate distinction to the work. However, as a limited released demo (a hundred copies or so were printed to a tape label), from a younger musician, there are issues to be expected, and problems do manifest in the songwriting and the underwhelming production standards which should be addressed. For one, Nagh Faëre uses a drum machine to program the ballistic battery beyond his guitars and vocals, and while I bear no inherent opposition to the practice, which makes sense when you can't find a drummer, there are certain percussive elements to the recording that need some adjustment, particular the cymbal crashes which lose their natural resonance, feeling too forced and mechanical.

Another issue is with the balance levels of the various tracks, which often feel inconsistent due to being recorded at different times, for different releases (a pair of tracks hail from a promo Nagh put together the year prior, and the rest were to be divided across several other demos). Again, this is to be expected on a demo, and it's not much of a distraction when listening through individual tracks, but it does deter the overall flow of the demo from reaching a more effective whole. As for the material itself, its traditional black metal reliant on primal repetition, a subtler subtext created through the raw atmosphere and ringing and jarring of the chord patterns. Obvious parallels could be drawn to Darkthrone, Burzum, Horna or Nargaroth, but Man Daitõrgul doesn't sound too much like any one of them, and he throws in numerous, numbing acoustic passages and even a clean vocal sequence in "Norvaragell Sgă (Parte I)" above the samples of clanging armaments, battle and dying that shows the musician is willing to diversify his material where fitting.

I found myself marginally less inspired here by the faster, blazing guitar sequences in "Zo Evaƥƥ Ngeordeika (Ngeordeika across the Seas)" and "Am Nagh Velħvv Dukain Ħarr (The Men that Become Wolves at Night)" than by the slower segments throughout the demo, but once he hits upon the latter, he evokes the same sorcery as his forebears, channeling the listener into some forgotten, foreign space in "Norvaragell Sgă (Parte II)" or the closing instrumental "Velħvor Kœ (Velfor’s Skin)". You can easily close your eyes here and envision the drifter, the survivor swept across the plains of the dead, the bones of the forsaken, although the guitars themselves might benefit from a degree of added variation. Nagh doesn't rely on synthesizers to do the work for him, it's the droning of the guitar chords themselves that are responsible for the atmospherics.

While Norvaragell Sgă does not entirely distinguish Man Daitõrgul from the hordes of other demo level and deep underground black metal projects, neither does it fail to deliver upon the grim, mythic concepts bred into the lyrical imagery. There were moments throughout this where I was certainly paying close attention despite the shortcomings of the drum programming and the general lack of versatility in its composure. None of the drawbacks are crippling, but they are evident to the ear. For a demo, its pretty straightforward, substantial and honest, with over 34 minutes of material, and it will be curious how Nagh continues to develop the scriptures and music of his cruel imagination in dark unison.