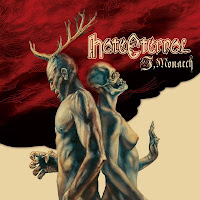 Not sure what the obsession with 'royalty' is among Hate Eternal's album titles (Conquering the Throne, King of All Kings, and now this), but it probably has something to do with the pseudo-Satanic menace and majesty Rutan is attempting to exude through the lyrics and music. A new John Milton, born of a ripping corpse? This time the concept is joined to a rather abstract cover. Clearly not as cool as those of the first two albums, but at least an interesting aesthetic abstraction from what most people were likely expecting. Musically, I, Monarch does not fall far from the sophomore King of All Kings, intense and discordant where it requires, dynamic and forceful, but perhaps not quite so heavy overall.

At this point, the issue with Hate Eternal is that the band's adherence to becoming the newly defined Morbid Angel of the 21st century is like a tsunami without an unsuspecting port to destroy. Rutan and Derrick Roddy whip up a veritable storm of calamity here, with incessant blasting and so much double bass that it becomes a rather moot point: such a brick wall that it hinges on the listener's exhaustion. Thus, in diametric opposition, I find my ears listening for anything that diverges from this formulaic ferocity. I turn straight towards the lead sequences of "To Know Our Enemies" or "Behold Judas", which weave appropriate malevolence into the aggregate jock escalation of the drums. I bathe in the wonderful escape of instrumental finale "Faceless One", in which the duo and bassist Randy Piro exhibit enormous skill at something more musical than you will find elsewhere on this album: a whirlpool of delirious percussion and coiling riffs that cede into scatterbrained fusion leads and thrashing.

But this is not to say that the thrusted excess is necessarily unwelcome, because tunes like "Path to the Eternal Gods" or "The Plague of Humanity" are well adapted to their chosen trail of destruction. Brutal bricks of contaminated concrete, urine, feces and flies being flung at the audience in dizzying waves, each with a stupefying muscular definition. I, Monarch takes a lot out of you, and the fact that the production is a dash more wholesome and contemporary than the more stringy ablutions of King of All Kings is not a crippling factor. However, it does suffer from that pervasive 'more of the same' syndrome that so often lurks in the rafters of the more extreme death metal reaches. Rutan and Roddy seem so intent on flattening all the opposition that they don't quite realize what great songs they might be capable of if they were to slow it down a notch and evoke the surreal menace that the cover image seems to hint towards. This is still a good album, but less impressive than the first two trips to the edge.