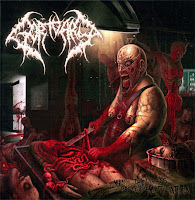 It's got to be increasingly difficult to stand out in the brutal death metal field. There are just so many bands performing at an identical level of technicality and extremity, equal parts slam and acceleration and painfully little experimentation or novelty left in the genre. This space is where an act like Gortuary both falters and excels, because they cover most of the bases extremely well. A fresh and visceral production gives a wealth of crunch to the guitars. They vary up the tempos as often as they're able without stretching into new territory. There are actual riffs of note in between stretches of predictable punishment. The cover art and logo are appealing, if you've a fetish for entrails and anatomy.

They're not quite so manic or frenetic as other 21st century Californian tech death acts (The Faceless, Decrepit Birth) or so precise and brutal as something like Severed Savior, but they offer enough variation that one doesn't become immediate exhausted with their blunt and seismic delivery. The vocals are steeped in the guttural monotony one expects from the genre, with very little deviation, somewhere between a Will Rahmer, Chris Barnes and Corpsegrinder; but let's be honest, this will hardly detract from the enjoyment of a gore drenched, gut soaked audience that is often pretty content with more of the same. The riffs very often indulge in the mindless mute-squealing patterns so widespread across the genre, or other guitar tweaks, but there are occasional flights of clinical eloquence, like in the wild bridges of "Pool of Excrement" or "Splatter Fecal Matter" that show the band does have chops beneath the more muddled walls of slam that dominate the compositions

Like many of their peers, Gortuary are competent at building excitement through horror or porn movie samples, like the 8MM sample used in "Mutilation by Double Penetration" or the more surprising Forrest Gump sample in "Hereditary Retardation". These help towards a taut and disgusting feeling of 'completeness', but ultimately my lack of interest in the album came through the dearth of compelling guitars. Just about every member of the band is competent, from the steam hammer drumming to the versatility of the churning aggression of the guitars, but there are just too few moments of distinction, too few tracks that demand a replay. I'm hearing this in reverse order to their sophomore, Awakening Pestilent Beings, and I admit that I actually prefer this over that later work. Certainly this is not bad (neither album is). There's an obvious audience for the style, and if you dream of amputation and devouring human innards, you could do far worse. But despite the crushing consistency the band mete out, it's just not something I'd go out of my way for.