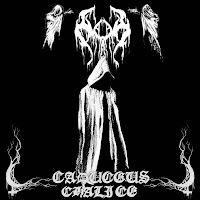 Outside of Striborg, there's not a wealth of atmospheric black metal from Australia that I've discovered or enjoyed. Until Moon, that is. Forming some years ago, this has long been the project of a single individual, one 'Miasmyr' as he channels the tropes of spacious and incredibly grim, primitive black metal into a lush otherworld where the very process used to record it compensates for any true lack of innovation. Caduceus Chalice is the first full-length, following up on a series of demos and EPs, but what one will immediately notice here is the very sound of the thing, a dire and malevolent apocrypha of carnal repression that becomes a thing of beauty despite itself.

Basically, you've got these distant, echoing vocals being carried across either subterranean or deep, dark woodland spaces while desolate razor guitars hiss at the very edge of perception. The drums remain steady, programmed and driving, while keyboards play through the voracious eloquence like spectral choirs. A clear influence would be Burzum's Filosofem, but I might also compare this to some of what Xasthur, Leviathan or Striborg have achieved, only with a more straightforward purchase upon the listener's lonely soul. Tracks like "Forest Samhain" and "Beneath" do devolve into a measure of repetition, but Miasmyr is wise to never let such bleak passages procrastinate forever, so like the greatest of black metal, one does feel as if he or she has partaken on a journey, ever downward into the seas of madness that slosh at the base of the soul like stomach acid. The latter half of the album, consisting of "Caduceus" and the 20 minute "Chalice" itself could be counted as something more experimental, more deeply rooted in sheer atmosphere and ambiance, but they never concede the stark oppression of the pure metal tunes.

Call it depressive, call it suicidal, or call it opaque, Caduceus Chalice is a thing of atmosphere and wonder in accordance with the finer fringes of this tradition, easy to become absorbed in if one ceases to hold onto the guiding lights of hope and acceptance. Clearly something you want to be checking out if you're into any of the artists I've already listed, or perhaps Hypothermia, or even Drowning the Light. 50 minutes of warmth that you will never have back, leeched from your spirit with each passing, paranormal phrase. Mired, resonant and raw. A stellar, lunar acquisition for Moribund, which will hopefully exceed the extremely limited cassette format it was previously released upon. Kills.