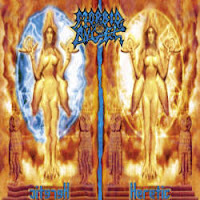 The 21st century has not been the most productive for Morbid Angel, who are now at the precipice of releasing only their 2nd full-length beyond Gateways to Annihilation (at the turn of the century). Now, granted, it's not as if they truly needed anything else to secure their legacy as legends or pioneers of the death metal genre, inspiring thousands of similar acts, but there seems to be this frivolous, counter-concern within the Trey and Pete camp in recent times. They'll do a tour, play the oldies, and every now and then, when they can bring themselves to care, churn some new material out of the womb of their imaginations. They've made their mark, so why bother to make another?

It's this tinkering and attention deficit which poison Heretic from achieving higher accolades, for while the 7th studio outing has its curiosities, and even a few revelations, it lacks the consistency and desolate might of its predecessor. Gateways to Annihilation was a trying and poignant glare into emptiness through the muscle of pure force, but Heretic seems far lazier. The guitar tone is thinner and thus less potent, especially since Trey is still focusing heavily on the twisted palm mute, lumbering backbone he had been using in the compositions since Blessed Are the Sick. A few of the tunes like "Cleansed in Pestilence (Blade of Elohim)" and "Curse the Flesh" seem as if they'd be scorchers with a better guitar sound, but instead feel bulimic and limp. The drums are quite strong, par for the course through the band's history, but without a more interesting sheet of riffing overlay, they are unable to get far of their own accord.

On the other hand, Heretic is still 'interesting' when it wants to be. Some of the faster breaks found in tunes like "Stricken Arise" or "Within Thy Enemy..." are well balanced and prove the band still have their extreme chops, even if musically speaking they were no longer riding the edge of the genre's levels of technicality and proficiency. Steve Tucker is strong throughout, his vocals digging into approximate levels of pain as Gateways. A number of the instrumental segues are quite wonderful, like the ominous crushing depth of "Place of Many Deaths" or the tranquil ambiance of "Abyssous", or even the dark age drought of "Memories of the Past". Morbid Angel attempted some similar, ritualistic environments beyond the metal itself with their shaky 5th album Formulas Fatal to the Flesh, but I feel that these work far better individually (though I could have done without the inner geek channeling "Victorious March of Reign the Conqueror", inspired by the animated TV series; cool idea, mediocre execution).

Then there's the bonus disc, which is full of rough instrumental mixes of the vocal songs, and a bunch of isolated solos and snippets. I guess if you really wanted to use some of the metal tracks as background without Tucker's presence, it's useful, but I'd rather hear some cool unreleased tunes or a live set or anything. The core album contains a "Drum Check", which totally breaks up the otherworldly effect a listener might experience during a better Morbid Angel record, and this should have been consigned to the bonus disc, but it's not, and that is yet another reason the disc feels so hackneyed and half-assed. None of the metal songs here are necessarily 'bad', but they truly lack the primal and hostile power of the previous work, and I can't think of a single entry I'd offer on a Morbid Angel highlight real, aside from some of the ambient fare, which really wouldn't belong. Despite the rhythmic exploration, decent lyrics and leads, and the stylistic deviation for the off-tracks, it's just not one of their best.