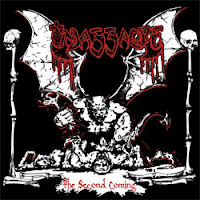 Though its demo status and sound quality might serve as a barrier to those seeking studio level output, The Second Coming is nonetheless the best of Massacre's body of work. Until Hell's Headbangers re-issued it in 2008, though, there was very little means by which to get your hands on it (the material was avoided for the Tyrants of Death compilation a few years prior). Originally offered to their then label Earache in 1990 for appraisal, this is a Massacre that might have been. A beefier, death/thrashing hybrid entity which delivered far more on the riffing skills than the incarnation most would come to know with the lacking From Beyond album or Inhuman Condition EP. Sadly, it earned a red light from the label, and Kam Lee and crew were sent back to the drawing board.

Now, just because I said this is the 'best' of Massacre, doesn't mean it's the bees knees, or worth going out of one's way to acquire. What you've got is a pretty standard thrash affair with more similarities to S.O.D. and early Sacred Reich than the Florida death metal of the members' peers. Lot of meaty mosh rhythms that permeate "The Second Coming" or "Mangled", pretty much built for tough guys. The riffs are bouncy and fun, and the bass is dialed up thick, perhaps too thick when Butch Gonzales starts slapping and popping like an asshole during "Devouring Hour". You do get the occasional death metal breaks in the rhythms, mostly in "Bleed to Death" or "Psychopain Trip", but without Lee's association with bands like Death in the scene, I doubt anyone would categorize this as death metal. As for Lee himself, he uses this angry tone redolent of Rowlf from the Muppets, if he were pissed off and packing projectiles and sharp objects, but he does have a unique character about him, and also lets out a few noteworthy screams (as in "Mangled") that kick ass.

In summation, The Second Coming is not really the Massacre that would go on to its (undeserved) cult status, and it's got a handful of issues. The bass too dorky in spots, the actual riffs not that standout, but the overall atmosphere is furious and sure to have old school 80s thrashers into Nuclear Assault and S.O.D. breaking out their hi tops for some shit kicking. I can sort of see where Earache were coming from in rejecting this: thrash was phasing out of style by this point, and they wanted more extremity (i.e. death metal). That said, I enjoy this a little more than From Beyond because at least its not just a third rate (if not terrible) bite off Death, Obituary and other death metal bands that had grown popular at the time. I was able to connect with this material a sliver more, and I wonder if they would have ultimately gotten a more favorable reaction in the thrash genre.