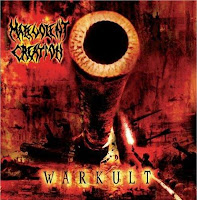 2004 was a busy year for active Floridian firing squad Malevolent Creation, who not only released a half-decent live offering in Conquering South America, but also a new album that proved to be their best in many years. In fact, outside of the dynamic one two punch of The Ten Commandments and Retribution which kicked off the band's career, Warkult is the first I'd recommend to anyone seeking a good cross-sampling of the band's urban armaments and incessant brutality. The strength lies in the songwriting, the devil in the details, and where so many of their intermittent releases lacked scope and dimension, Warkult gives us a strong level of variation centered around that oh so elusive principle: the good riff.

Yes, the 11 originals here offer a veritable smorgasboard of good guitar lines that span the realms of both their faster paced thundering material and thick, chugging breakdowns. For example, the belligerent inauguration of "Supremacy Through Annihilation" with the great drum fills, arching and descending mutes that hook the listener straight into the concrete grooves. The explosive death/thrashing behind opener "Death March", or the raw, slight and tasteful hints of melodic death metal within a "Captured" or "Preemptive Strike". A few dull and faceless brutes do solicit the depths of the album, like a "Ravaged by Conflict" or "Merciless" which I'm very hard pressed to remember against the band's catalog, but then there are also some tight pieces like "Shock and Awe" and "Tyrannic Oppression" that serve to compensate for the less inspired.

Another treat here is the cover of "Jack the Ripper", an obscure death/thrash classic from the Australians Hobbs' Angel of Death. Not just a great selection on principle alone, but Phil Fasciana and crew work it deftly into their own, hammering context with ease. Warkult has a very workmanlike, honest production to it which captures the drums, bass and guitars equally, while Symons gives a deeper, neanderthal impression than he came off on the 2004 live album. Surprising is that the album seems superior wherever it's NOT just blasting off mindlessly (as in a few of the less memorable titles I listed above). Where the band take their time to hone in on the distinct guitar riffs, the songs become much more interesting, sort of a halfway point between Eternal and The Fine Art of Murder, and as a 'warfare' concept album it works well enough into the psychology of slaughtered and slaughterer.