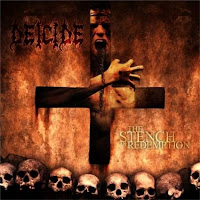 It wouldn't take much observation to conclude that I am not among the biggest Deicide fans out there. I found their first three albums functional and somewhat appealing, but not to the extent that I'd listen to them over other acts in their field. As you can imagine, this did not make me the most popular person at local cross burnings or weightlifting competitions. But then something happened. In what must be one of the most bittersweet moments in all USDM history, Glen Benton and Steve Asheim had parted ways with the Hoffman brothers, and taken on the exact right replacements: Ralph Santolla and Jack Owen, alumni of other popular Florida acts Obituary and Cannibal Corpse who had left those gigs to pursue something new.

The Stench of Redemption is something new. An album of remarkable character that brought novel refreshment to the bland formula Deicide had been pandering to suckers for the last four full-lengths. A career highlight in both production values and songwriting quality, its unexpected assertions of melody and the depth of its construction are skillfully married to Asheim's core hammering and Benton's gruff and forceful delivery. As a massive fan of Jack Owen's work in Cannibal Corpse (at least from The Bleeding through Gore Obsessed), I was quite excited to hear what he would bring to this altar, and while this isn't necessarily the riffing juggernaut that I'd consider Bloodthirst or Gallery of Suicide, it's nonetheless impressive. Especially as the postscript to about 10 years of dumbed down, rehashed drivel that had so rapidly converted the once potent and promising punishers into one of the most vapid circus acts of blasphemy in all the damn genre...

Fear not, because Deicide has not exactly gone 'melodeath'. Much of this added depth is built through the leads, which have a decidedly more exotic and atmospheric flavor than what the Hoffman's would so often tear forth. The riffing in general is more creative, especially the balance of brickwork and solo flourishes that dominate "Desecration" or "Walk With the Devil in Dreams You Behold", which cast a broader net than the predictable pummeling of Scars of the Crucifix or In Torment in Hell. There are still a few barren ragers here, full speed ahead in "Not of This Earth" or "Never to Be Seen Again", but even these are constructed with great care, intricacy and even a handful of subtlety that widely broach the subdued conventions of the band's recent past. The music is not the only improvement, as the lyrics have once again captured that half intelligent sacrilege of Deicide and Legion, rather than the laziness exhibited through most of the 90s. I wouldn't call them amazing, but they'll do in a pinch.

Sure, the titles "Death to Jesus" or "Walk With the Devil" might still seem generic, but Glen has provided some evocative imagery and less of the brute stupidity that served to drag down the previous records. The Stench of Redemption also sounds magnificent, incredibly rich considering its from the same Morrisound studio that never quite brought the band to their full potential in the past. Amazingly balanced guitars finally muster the muscle to compare with the strong arm that is Asheim, and there's a taut contrast between the six strings and four that creates a nice, atmospheric depth to the bass. No mistake about it, this is the most accessible of Deicide's CDs, but what might have been a cringe worthy disappointment turns out to be the best of the litter, thanks to the perseverance of its progenitors and the proficiency of its new players. Perfect this is not (a few of the riffs possess a stagnant air of 'filler'), but it might just be the closest this band ever gets.