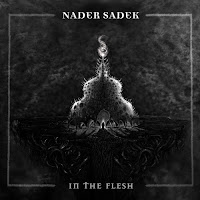 It's difficult not to draw a comparison between the Nader Sadek debut and the latest, divisive effort from Morbid Angel itself, for this New York based collaboration indeed feels the natural extension of Steve Tucker's time with the Florida legends. Seriously, if one was to dial back the years and erase Heretic from existence, he could slap the big old, infamous logo right on this record and the band would have had another success! However, In the Flesh is not all heedless derivation, but achieves an atmospheric of dynamic fluctuation that Tucker's alma mater has yet to even hinge upon. Considering who he has to work with here: Cryptopsy thunderbolt Flo Mounier and Aura Noir string slasher Rune Eriksen (aka Blasphemer), not to mention Egyptian visual artist and conceptual director Nader Sadek himself, I shouldn't be surprised at such an elegant, eclectic approximation of a classic sound.

I should note that you're not going to find a lot of the Aura Noir style riffing here, nor a ribald and unhinged performance from Mounier. Both rein themselves into this material fluidly, conjuring a striking amount of variation and mysticism beneath Tucker's unhallowed vocals, which have been lent even more resonance with some added echo here that truly pushes it well above the precipice of quality. There are several roiling, churning masses here like "Mechanic Idolatry" and "Suffer" which are torn straight from the playbook of Gateways to Annihilation or Formulas Fatal to the Flesh, but the interspersed ambient shorts ("Awakening", "Rusted Skin", and "Exhaust") and hyper progressive frenetics in "Of This Flesh" and "Petrophilia" ensure that this is no clone. Perhaps my favorite track is the instrumental finale "Nigredo in Necromance" for its fibrous, malevolent death rhythm and subsequent shift into bleary, ringing melodies. If only the band had though to incorporate Tucker's vocals into this and make it entirely unforgettable!

Also, the album is rather short. Under 30 minutes, but at the same time, it strips itself of any excess ballast. A brief trip into the yawning arches of these artists' imaginations, but a poignant and effective one. It might have been marginally more interesting had it better involved the unique characteristics of Eriksen and Mounier's main bands, but it seems inherently focused upon the heavy, nihilist grooving of Morbid Angel and Tucker's familiar presence and Sadek's exotic direction. The project also makes brief use of Travis from Cattle Decapitation, but its not all that important or standout and pretty much anyone could have done this. A lot will be made of the fact that this is the album Morbid Angel 'should have made', and I could see how that might have been the case in some alternate reality. But let's not detract from the solid work done here. In the Flesh is not entirely innovative, but it takes a beloved sound into a cavernous wreath of welcoming darkness, occasionally exposing the audience to the unexpected. Not as cool as, say, the latest album from Mitochondrion or the Sonne Adam debut, and it's an ample proof of credentials for three astounding musicians worth their salt, and yours. Good pickup for Season of Mist, and let there be more from this project!