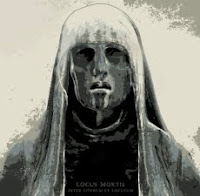 While I'm hardly the biggest advocate for re-recordings of albums, preferring to hear the material in its original projection (for better or worse), there are occasionally the beneficial side effects of exposure to those previously oblivious to a work's existence. Until hearing this remake of an obscure, 2005 Italian black metal debut, I was almost entirely unaware of the band's existence. I might have encountered the name when doing some research online, but I never deigned to track down their albums, which turned out to be a distinct act of ignorance. One for which I must now atone: Locus Mortis kicks ass, and Inter Uterum Et Loculum MMXI is one of the freshest black metal records I've heard in recent months, despite its conception being six years or more in the past.

This is simply one of the best bands I've heard at incorporating death growls into the streaming terrain of nocturnal terrors that most often distinguishes the black metal genre. Rather than hanging themselves upon the crude production of many of their peers, they take a broader, more expansive approach, with thick and echoing guitars that alternate between the consistency of steady stonework and the sparser, atmospheric melodies that pop up in the midst of the battle charges ("Te Sit Perpetua Vita"). Rather than the expected rasping, you get this full bodied, guttural depth that reverberates across the thundering propulsion of a "La Via Mi Fu Mostrata" or "Sentore di Morte", but the band also will throw in a chug based breakdown to really mess with the listener's expectations, or evoke this amazing, beautiful subtext which is nearly enough to draw tears from the eyes. The predictable but poignant melody running beneath "Fiamme" is perhaps the best example here, but it's not the only one.

Other qualities include the major bass tone happening here, especially for the closer "Relitti" in which it races against the vacuous discord of the guitars, before ending in an extended noise sequence that exhibits the eclectic breadth of the band. Inter Uterum Et Loculum MMXI does occasionally lapse into the repetition and monotony inherent to its genre, but the mix and the passionate force that the band bring to bear more then compensate, and there are usually a few moments of structural variation and adaption throughout each of the longer tunes. Intelligent and powerful, Locus Mortis has done well to reinvigorate its material and elevate its creation to the level of peers like Spite Extreme Wing, Urna or Tenebrae in Perpetuum. To the level of first rate Italian agonies!