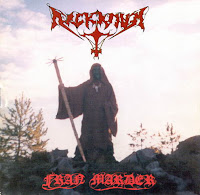 Fran Marder is the first substantial stop on the evolutionary journey of one of Sweden's finest and most consistent black metal outfits, Arckanum. Cutting an imposing (or amusing) figure with his robes, masks, and archaic weaponry (axes, staves, etc.), Shamaatae was able to instantly ingrain himself upon the memories of those who cast eyes upon him (much like Rob Darken's armored woodland posing through the history of Graveland). But Arckanum also deserves some credit as a Swedish answer to Burzum: one man capable of multiple instruments, a single vision joined only by those he hand picks for guest roles, but excelling beyond the crude 'bedroom black' metal aesthetic to something hinging on professional.

This is due largely to the production, which was shared with Peter Tägtgren at his Abyss studios. No stranger to the black metal genre, Fran Marder does share some attributes with Peter's own house band The Abyss in the dry but consistent mix of the guitars, but what Shamaatae has on offer is a far more curious and cultural display of consistency. He's one of the earlier black metal acts to pen his lyrics in the best approximation of the Old Swedish tongue. He's unafraid to draw forth outside or unexpected influences (female vocals, ambient/ritual sequences). He has less of a focus on central melodic themes than his peers at the time (Dissection, Sacramentum, etc), but one can still find the guitar patterns gorgeous and addictive in parts. Fran Marder is not quite the best album in his catalog, nor does it totally distinguish itself from the other formative works of the scene and period, but its selections served as a solid and effective control group from which Shamaatae could further expand his horizons.

Like much of 90s black metal, the guitars relied heavily on the repetition of somber, frost born notation that lulls the listener into a bleak despondency, and much of Fran Marder is performed at a fast but not impossibly fast pace laden with competent blast work. A number of the tracks like "Þe Alder Hærskande Væsende Natur" and "Kununger Af Þæn Diupeste Natu" play this pretty close to the hilt, with little memorable riffing involved in the experience, only the echoed rasp Shamaatae uses for the majority of the album. But there are others such as "Svinna" or the title track which are able to conjure a more lush, calculated wall of sound that envelops the ear. The slower, driving fare like "Gava Fran Trulen" or "Trulmælder" reveals a semblance to the band's precursors Bathory, Darkthrone and Hellhammer, and in general engaging, while "Baerghet" comes off the most original, long stretches of dual guitar melodies that are only joined by percussion near the close of the track, and both rasped and female vocals.

The ambient sequences, especially those used to bookend the album ("Pans Lughn", "Ener Stilla Sior Af Droten Min") are immersive and well done, but a few of the stranger ideas (like the down tuned narration of the intro or Tägtgren's dorky higher pitched guest vocals in "Trulmælder") leave something to be desired. In all, though, Fran Marder was a very promising effort, with a commendable production (both the original and the re-issue) ethic and a rigid, folksy mystique being channeled through its cold winds and ambient resonance. It would be well over a decade before Shamaatae would write an album of a legendary disposition, but the journey itself has not been without its merits, and Fran Marder, for its few flaws, was well worth the time of the avid Scandinavian black metal audience.