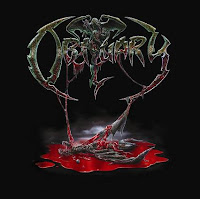 Left to Die is one of those quaint little EP releases that does very little to justify its own existence, but nevertheless, Xecutioner's Return must have stirred up enough excitement that Obituary were 'returning to their roots', so Candlelight gave it a green light. The best I was hoping for from this was that the band continued to pace themselves and actually write out their new material, rather than offer anything further along the dry and abominable axis of 2005's Frozen in Time. It would have been great if the band could settle into a positive evolution, unlike the grooving and hardcore that inspired them in the 90s, but such is just not going to be the case.

There are two new tracks here, "Forces Realign" and "Left to Die", which would be included at the end of their next full-length, the mediocre Darkest Day. This sort of gimps about half the value of the EP itself. But even had they been exclusives, neither is really any good They do at least follow the example of Xecutioner's Return in bring out the early 90s, with the same focus on the leads, but the rhythm riffs are pretty meek, with only one bordering on catchy (the verse of "Forces Realign"). These are joined by a re-recording of their classic "Slowly We Rot", which is a waste of space, adding absolutely nothing of note that could not be gleaned from the original other than marginally modern production and a tweaked but forgettable solo; and a cover of Celtic Frost's "Dethroned Emperor". This is not the first time Obituary have paid tribute to their major influence, "Circle of the Tyrants" (from Cause of Death) is a quite beloved cover, but this time out it's not so effective, lacking much of the original's charm.

Lastly, they've included a video for "Evil Ways", which is little more than a standard rock star exhibition, the band banging their heads in front of an American flag while skulls and other grisly images are occasionally superimposed on them. Not the worst I've seen, and the song itself is one of the better tracks of Xecutioner's Return, but again, it's not really a reason to pursue this. You can just watch the video on Youtube or something and get just as much value. In the end, Left to Die should be left out to pasture. It's got two album tracks from one of their weakest efforts (Darkest Day is even less appealing than The End Complete, if not as bad as Frozen in Time), a remake of a classic that needs no such treatment, and then an average cover. Save your dough.