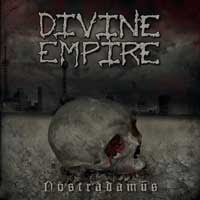 Metal music has long been like a nursery school child's playroom clay, constantly pounded away at until all of the characteristics become dulled and indistinguishable from that of the next tyke. As sad as it is to hear, this is most often the case within the more extreme ends of the genre, namely death and black metal, and Divine Empire is yet another (unwitting) culprit of the form. Their first two albums were not half-bad, possessing at least a few moments of compensation for the time spent examining their contents, but the buck stopped upon the third full-length Nostradamus, an album I feel hard pressed to distinguish from several of its peers. If you told me this was a new Morbid Angel, Hate Eternal or even Malevolent Creation CD, I would be forced to agree with you until seeing contrary evidence.

It's got the same mix of blasted hostility and percussive grooving that the last did, but also too often reminds me of something Morbid Angel might have written on Domination, Gateways to Annihilation or Formulas Fatal to the Flesh. The downtuned guitars are so overt here that they often remind me of Korn or Mudvayne when they hit a breakdown, even if the chugging structures are not quite the same. Some of the songs, like "They Rise" are so chocked with vapid and disinterested chugging rhythms that I find them almost torture to sit through, leaving the album to survive on its faster, octave fueled rhythms akin to Hate Eternal's Conquering the Throne. Divine Empire was on its third drummer in three albums here, with Duane Timlin (of numerous other acts) stepping in to replace Alex Marquez, who apparently had some fallout with Jason Blachowicz resulting in the ode "Cuidate del Traidor", with some less than flattering, and frankly sucky lyrics. In fact, all of the lyrics on Nostradamus are pretty weak, another area in which the Floridians fail to really stand out...

So, with bass too loud, dearth of staying power in almost every track on the album, and lyrics that are little more than poop, is there any reason to be excited over this album? Certainly not the dull ass cover art. In truth, there are a handful of tracks which pummel enough of a solid death/thrashing that you won't yawn too much: "Season of Extinction", "Basher" and "Cuidate del Traidor", but even these I wouldn't mistake as the kind I'd want to experience repeatedly. I kept hanging on, knuckles white for that one explosion to justify this album's existence, and it never arrived. Nostradamus suffers from that 'me too' syndrome which is especially noxious within the folds of 21st century death metal: not enough brutality to outdistance its contemporaries, not enough songwriting ability to muster even cult classic status. Doesn't suck. Doesn't succeed. There is simply nothing to see here, and it's time to move along.