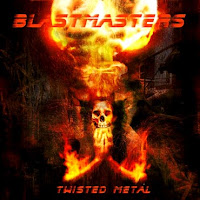 It doesn't take more than the band name and album title to confirm that the Blastmasters don't take themselves all that seriously, but you might surprised when you actually spin the disc that its a volley of full forward, brutal death metal much in the vein of Deicide, Hate Eternal, Diabolic, and Morbid Angel. I should mention Diabolic twice because, well, Blastmasters basically is Diabolic, centered around long time drummer Aantar Coates and several others who have appeared on Diabolic studio material (Jesse Jolly and R.J. Reinagle). Naturally, the similarities extend beyond the roster itself into the music, which feels comparable to the more brute and mindless Diabolic slugfests like Vengeance Ascending or the Chaos in Hell... EP.

As the band's moniker infers, Coates lets himself completely off the hook here. Almost every second of riffing is supported by either his athletic double bass or ceaseless blasting. Beyond the obvious feat of impressing the listener with their sheer force, though, I can't say that it's a boon to the composition (much like the Diabolic albums I mentioned). There is plenty going on with the guitars, from the frilly leads in "Shellfire and Tombstones" or "Altricial Metal-Genesis" to the climactic, destructive rhythm patterns wrought throughout, but so much of the album is devoted to straight, predictable bursts of speed that it too quickly becomes exhausting. Thousands of notes race past the ear, none of them clicking or sticking. In fact, it's so monotonous that the few deviations stand out that much more than they would otherwise, like the slower, ominous intro to "Implemented Digital Control" or the clever, schizoid spikes of melody in "Putrid Future".

In other words, this is pretty much the same issue that renders about half the Diabolic back catalog null and void of real interest. The Blastmasters are all talented enough guys, but when you compare something like this to a better Hate Eternal album or some of Morbid Angel's classics (Covenant, Domination, Gateways to Annihilation), you can just feel how lacking it is. How little the band are capable of conjuring up effective atmosphere, cataclysmic or apocryphal sequences to match the lyrics (which are surprisingly not bad at all), or individual riffs that demand an instant revisit. Twisted Metal is fast, angry and full of hot air, and ultimately the Blastmasters would dissolve after just the one album, several of them returning to Diabolic, since there was really no point in having two bands that sound so much alike, with the same constituents. It's not bad, but neither could I recommend this unless you're interested in more of the same, febrile extremity with little structural quality of note.