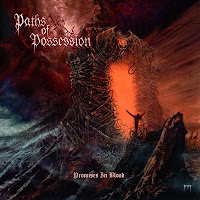 Things were beginning to look up for Paths of Possession by the time they got around to their sophomore. The most interesting of the band's developments was the acquisition of ex-Monstrosity and current Cannibal Corpse choker George 'Corpsegrinder' Fisher, who would provide a curious contrast to the band's mix of traditional metal and melodic death. A much different environment for the guy, and though he doesn't exactly change it up from his main band, the very difference in the musical content seems to draw out a different edge to this throat. Now, this might well have had something to do with the band's signing to Metal Blade, another positive step which could expose their unique, rocking approach to death metal to a broader audience. And then there's the cover art, which is beyond awesome...

Sadly, Promises in Blood itself does not quite live up to the potential of such an endeavor. Some of the tunes here are repeated from Legacy in Ashes, including "Darklands", "Bring Me the Head of Christ" and "The Second Coming", and while Fisher's vocals and a superior production standard trump the debut cuts, they have not suddenly improved riff-wise. Driving, mid-paced melodic fare that simply doesn't stick to the ears beyond a handful of spins. Several others are taken from a split the band had put out some years prior, including "The Butcher's Bargain" which is just a standard, mid paced piece with chugging and no decent riffs to speak of, the slightly more up-tempo "A Heart for a Heart", and "The Icy Flow of Death", which starts off slow with broad chords and then picks up to the same speed as most of the album.

But there are a few gems, usually newer songs like the title track "Promises in Blood" which is more intense, pretty much what I wanted to hear when I heard that Corpsegrinder was taking part; or "In My Eyes" with its storming percussion and writhing mute floes; or the huge and potent grooving of "Where the Empty God Lies", which just might be the best on the album. Here you get a good cross-section of Fisher's wider potential and the band's underlying concept come to fruition: a guest star making his mark beyond his safety net of saturated viscera. But the album is unfortunately not all that consistent, nor great, and these days it seems to exist only as a cursory curiosity for George's die hard followers. Simply put, Paths of Possession did not have that same level of excitement and intensity that all the Gothenburg and Finnish keyboard core melodeath acts bring to bear, even if their more traditional flavor was refreshing. A lot of the tunes here, while tightly executed, lack that explosive, elusive quality that makes the kids wanna jump up and scream. Slaughter of the Soul this is not, but neither is it totally disposable.