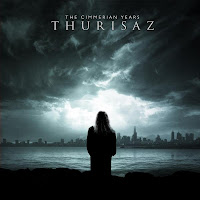 When I first read the title of the new Thurisaz album, I was rather surprised and misled into thinking it might be something along the lines of a Robert E. Howard tribute, or at least a conceptual album devoted to his character Conan the Cimmerian. Would have been strange, consider how the band's sophomore Circadian Rhythm was a pendulous, pensive concept cross-fusion of melodic death and dark progressive elements. Just a cursory glance at the cover reveals a modern cityscape, though, so it appears the Belgians have decided against the swords & sorcery that the title implied, but that's really alright, because I'm not quite sure how such a controlled act like this would have pulled it off.

The Cimmerian Years follows somewhat loyally in the footfalls of its predecessor, with a mix of death and doom elements cast in the glow of pristine production values, rhythmic variation and a mash of vocal styles that include grunts, snarls and mid-ranged male cleans. Songs like "Second Mirror" and "The Carnival of Miscreation" almost have a folk-like drive to them, in which the melodies snake and loop about, begging a comparison to earlier period Opeth. But then, much of the mix and modernization accrued by Thurisaz is more redolent of modern Opeth. If you're picking up what I'm putting down, then you'll note that I think this album sounds like a lot like someone pulled out various aspects of the Swedes' entire catalog, from Morningrise to the more modern Ghost Reveries, then tossed in a handful of Dan Swano's Nightingale, Katatonia or the lesser known Swedish prog metal outfit Wolverine.

Not to say that its terribly derivative, or that it fails to embark on a journey of its own, but I often found myself lapsing off into unconsciousness as I was trying to absorb myself into its polished flights of morose fancy. I found myself distraught by the rasped vocals, they sound a bit cheesy in a mix so clean, whereas the pianos and synthesizers woven into the background also failed to distinguish themselves outside of a mere, ambient accompaniment. There are some fine vocal harmonies throughout, especially in tunes like the brooding folk of "Inner Voices" or the intro to "Fare Thee Well", but they often reign in too tightly to create a numbing sensation that drained my attentions. The Cimmerian Years has its moments, and fans of Circadian Rhythms should not find themselves too disappointed, but there's too much focus on the variation of its conflicting styles, and I felt it was a bit too subdued on the whole.