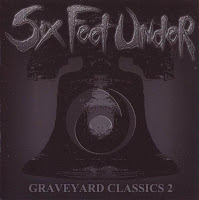 I've already been over the absurdity of how a band like Six Feet Under is somehow allowed to create an entire 'sub-brand' of their career like the Graveyard Classics series, shitting out arbitrary and uninspired covers of their favorite rock and metal hymns of the 70s, 80s and 90s to a limited crowd that must be so goddamn high that they failed to recognize that the album they walked out of the shop with was NOT adorned with a Phish or Dave Matthews Band logo. But Graveyard Classics 2 is a particular atrocity, in that it no longer collects some random and admittedly interesting choices to rewrite into the Chris Barnes legacy (the first sucked, but they at least chose a couple interesting picks like Savatage's Holocaust).

No, in what must be the Monarch of All Misfires, Six Feet Under and Metal Blade Records have joined forces to provide a cover album of...an album. A specific album. AC/DC's seminal Back in Black (1980), the first upon which Brian Johnson had replaced the late Bon Scott, and the album responsible for hits like "You Shook Me All Night Long", "Hells Bells" and the title track itself. All ten songs are reproduced here, lavished in a subdued production that keeps as close to the originals as humanly possible with the obvious exception that Johnson's gnarled angst has been supplanted with Barnes' monotonous grunting. Once straight and enthusiastic rock anthems like "Shoot to Kill" and "Shake a Leg" are drained of all their liveliness through drudging doppelgängers that never even risk a death metal sound beyond Barnes himself. Had the Floridian thugs at least tried to put more of a spin on this classic record, then we might at least praise them for making honest fools out of themselves! There is simply nothing metal about this beyond the Australians' original attitude and influence.

But this is boring and pathetic, with the only sparks of anything coming in the admittedly simple leads that breech the familiar, plodding chords. Graveyard Classics 2 is nothing more than what might happen if the blue collar front man your local Angus Young cover band took ill for a set, and they invited the kid from the generic death metal band that rehearsed next door to fill in for a night. A grand convocation of irony! I cannot for the life of me figure out why this was chosen as a viable consumer product, but then the same could be said for nearly anything in Six Feet Under's entire career, which has at best produced lackluster fare ala Maximum Violence or Haunted, and at worst...a string of phoned in, half-baked abominations that will have even the most jaded, hopeful philanthropist stroking is neckbeard in consternation.