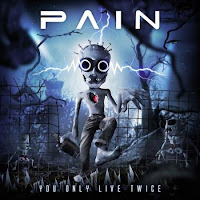 Amazing, the life that Peter Tägtgren's Pain has taken on for itself. I would have thought this dead in the ditch at maybe 2 or 3 albums, yet the project has arguably surpassed Hypocrisy in terms of its popularity in Europe. Not all that much of a shock when taking into account the style here: bubblegum techno metal with lyrics and titles that read like endless streams of pop cliches. But it's confounding to me that Tägtgren is so into this. A meal ticket? I can't say, since one would think that Hypocrisy and his production work/Abyss studio earn him a comfortable living. Either way, Pain is now seven albums deep, and You Only Live Twice is not about to rock the boat. The Tim Burton/9-esque cover image might be distinct compared to the backlog, but the music itself is generally the same its been since the sophomore Rebirth in 1999.

By that I mean a lot of keyboards and pianos serving up the central melodies in the compositions, while supported by chunky, processed groove metal guitars. Occasionally the riffs will bust out something more thrashing, or something redolent of Hypocrisy's more mainstream albums like Virus or Hypocrisy. Sometimes, the lines even blur as to which of the bands I'm listening to (as in the opener "Let Me Out"), but in general, Pain is known for the predominantly clean vocals. I think it's a bit hasty to call this 'industrial metal', since there are very few such elements outside of the synthesizers, which are more in line with the general idea of 'techno'. When Tägtgren is at his best here, he's able to create these driving, atmospheric moods through all too simple chord selections and the electronic graze of the keys, culminating in a somewhat catchy chorus ("You Only Live Twice" or the Sonic Syndicate cover "Leave Me Alone"), but even these rarely prove to possess much lasting depth upon repeated listens. Yes, a Sonic Syndicate cover...!?

There are a few breaches of protocol here which hardly go sunny side up, like the rocking of "Dirty Woman" which feels like Monster Magnet for a few minutes, or the even more Goth than usual creeping of "Feed the Demons". However, the rest are pretty straight driving Pain tunes with all the pageantry of your more commercial Gothic metal or pop acts (Theater of Tragedy after the turn of the century, a little Marilyn Manson, NIN, and so forth). Peter's vocals are all over the place. The guy can sing, but there are also grunts and snarls here which often cast a limp glow akin to those used in, say metalcore. I might not mind the music so much if the lyrics and song titles showed any predilection for thoughtful imagery or even the slightest fraction of intellectual stimulation, but apparently the intention is towards sugary, frivolous abandon with no real value outside of a half dozen bi-winning melodies. Not that the last few albums were all that great, but You Only Live Twice feels puerile even for Pain.