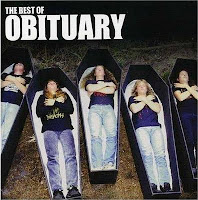 No fans actually want it. The band did not approve of its release. It is not suited to serve as even cow manure. Gee, it must be another of Roadrunner's fabulous fuckwitted entries into their 'best of' series. Another useless reprint of tracks that the label had already drawn profit from when they were released on their constituent full-length studio albums. Another failed molestation of the underground, who already have the albums and could not care less. Similar to what they did a few years prior with Deicide and Malevolent Creation, the Roadrunner brand has devised yet another ineffective paperweight of the past while their unfortunate gluttony for trendsetters and money makers was about to continue into another decade.

For God's sake, they couldn't even fill up a damn disc with this material! The Best of Obituary is but 52 minutes long, with 13 tracks. Each of the first four albums (Slowly We Rot, Cause of Death, The End of Complete, and World Demise) is represented with three songs, while the two most recent Roadrunner albums (Back from the Dead and the pathetic Frozen in Time) each get a single entry. Would it have taxed them just to throw in another pair from those albums? Or were they doing us all a favor by not wasting that empty space with tracks that no one wanted to hear anyway? Whatever the case, there is absolutely no impetus to purchase this lazy ass cash grab. If you're still in the dark: buy Slowly We Rot and Cause of Death. Enjoy the shit out of them in their entirety. If you're feeling daring after that, maybe give a listen to World Demise or Back from the Dead.

The plan here was obvious: Copy over some previously released music. Throw up an old photograph for the cover. Don't even bother using the band's logo itself. They've moved on to Candlelight, so it's just one last ditch effort to squeeze some green out of the few devotees sucker enough to buy anything with the band's name on it. Honestly, unless you are a metal radio DJ with no Obituary albums available to play on the air, and can get this for the cost of zero dollars and zero cents, there is just no need to bother at all. A vicious byproduct of greed and ignorance, from a once mighty label grown too big for its britches. I hope someone somewhere at least got a new Porsche in their garage over this. I'm sure John Tardy and Trevor Peres didn't.